What Use is Half a Wing?

From the American Institute of Biological Sciences press release:

Ken Dial and his co-authors present the experimental evidence indicating that ancestral protobirds incapable of flight could have used their protowings to improve hindlimb traction and thus better navigate steep slopes and obstructions. 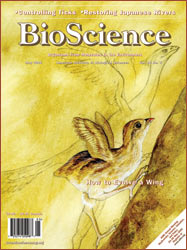 By using their protowings in this way, they would presumably have had an advantage when pursuing prey and escaping from predators.

Dial and colleagues performed experiments on several species of juvenile galliform (chicken-like) birds, concentrating on chukar partridges. Chukars can run 12 hours after hatching, but they cannot fly until they are about a week old. Even before they are able to fly, however, the birds flap their developing wings in a characteristic way while running, which improves their ability to climb steep slopes and even vertical surfaces.

They propose that incipiently feathered forelimbs of bipedal protobirds may have provided the same advantages for incline running as have now been demonstrated in living juvenile birds.

Dial and colleagues posit that ancestors of birds, which may have resembled the bipedal theropod dinosaur Caudipteryx, employed their protowings in wing-assisted incline running, which helps answer the seminal question for bird evolution first posed by St. George Jackson Mivart in 1871: "What use is half a wing?"

The article is published in the May 2006 issue of Bioscience.