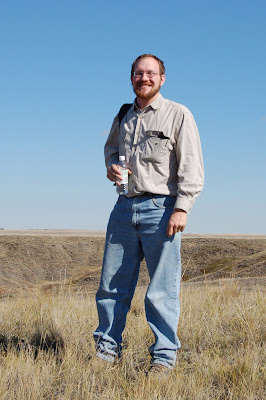 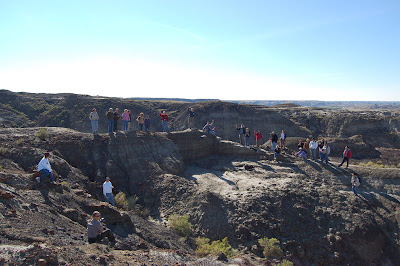 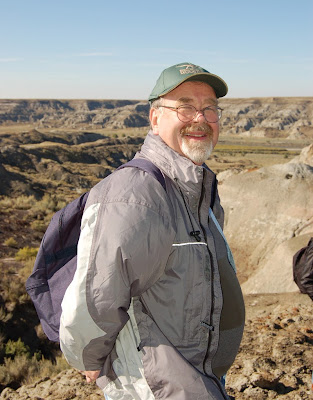 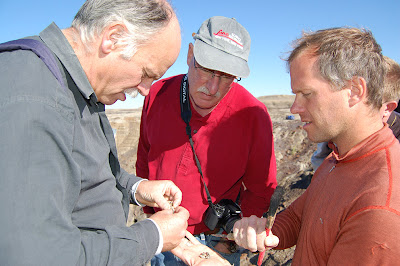 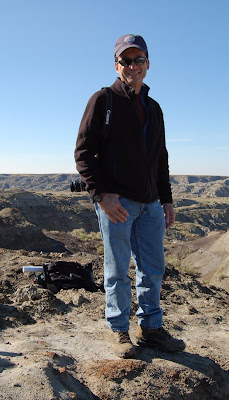 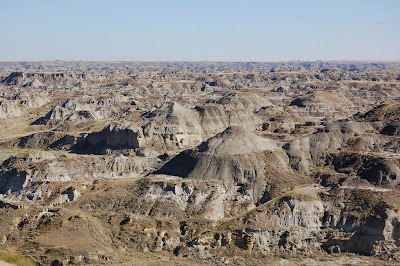 Dinosaur Park in all its beauty. 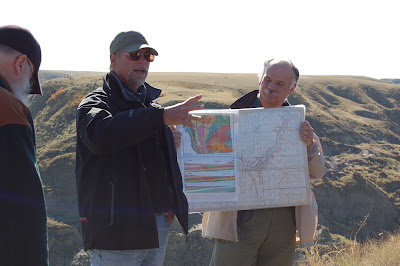 Dave Eberth explains it all (while Don holds the map). 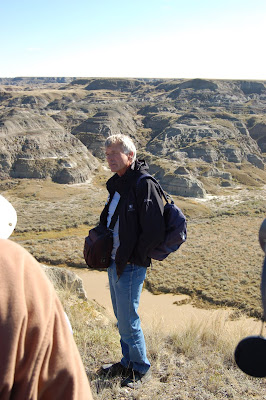 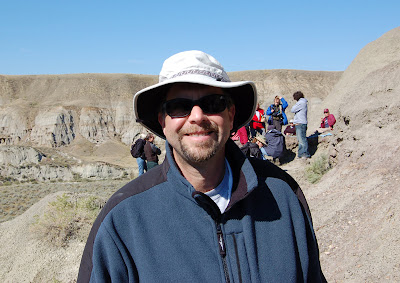 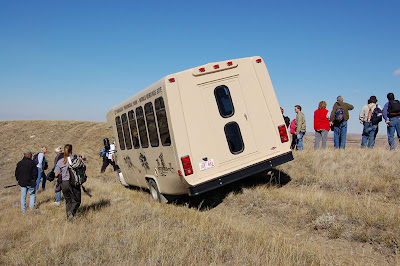 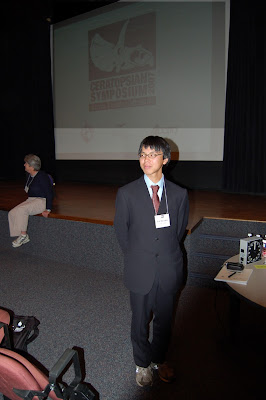 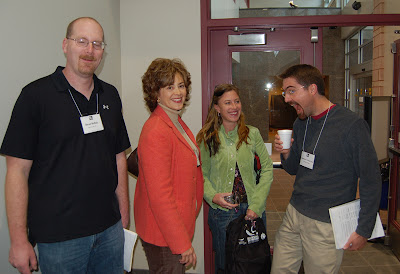 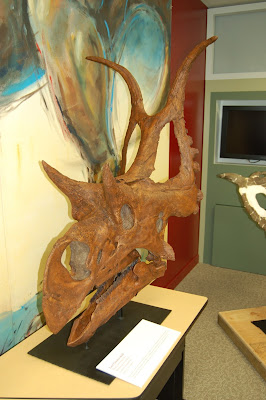 One of Jim Kirtland's new ceratopsids from Utah (hope that knee is better Jim!). 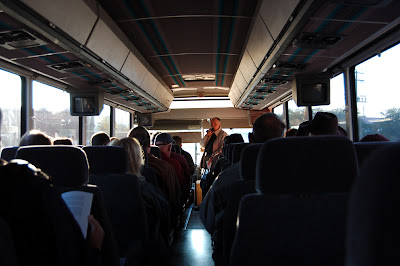 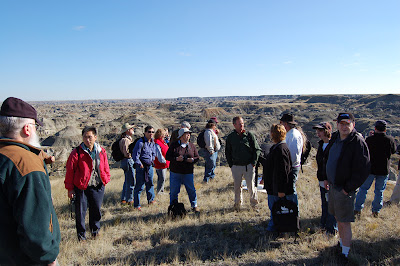 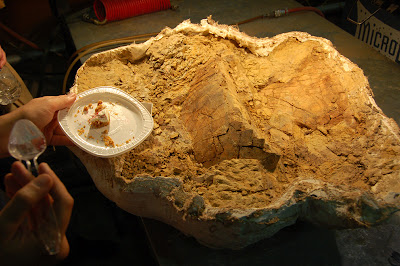 Nick's turtle (with cake) collected this past summer from the Milk River Formation as part of the Southern Alberta Dinosaur Research Group's on-going work and now under prep at the RTMP. 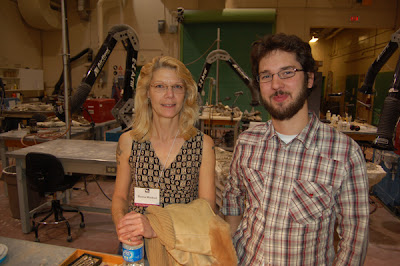 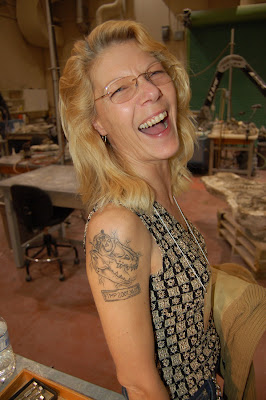 Donna's tatoo of "Mr. Daspleto", a prep project that consumed much of her life at one point. 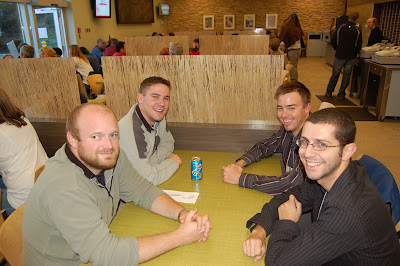 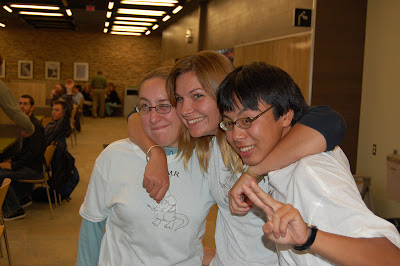 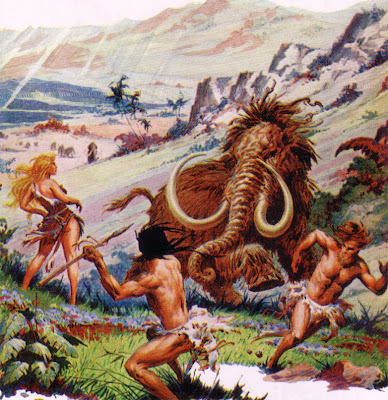 Art by Roy Krenkel from Tanar of Pellucidar
Abstract: Although the application of sequencing-by-synthesis techniques to DNA extracted from bones has revolutionized the study of ancient DNA, it has been plagued by large fractions of contaminating environmental DNA. The genetic analyses of hair shafts could be a solution: We present 10 previously unexamined Siberian mammoth (Mammuthus primigenius) mitochondrial genomes, sequenced with up to 48-fold coverage. The observed levels of damage-derived sequencing errors were lower than those observed in previously published frozen bone samples, even though one of the specimens was >50,000 14C years old and another had been stored for 200 years at room temperature. The method therefore sets the stage for molecular-genetic analysis of museum collections.

A new DNA-method to examine hair will give us more precise information about why the mammoth died out, or what the ingredients are in the cocktail of human races that are mixed in Europe and elsewhere. 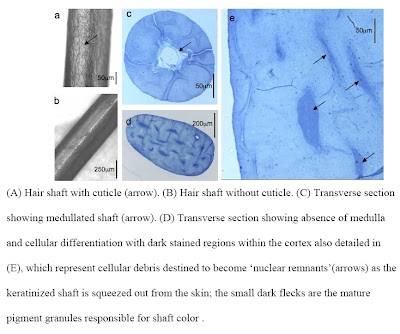 “So far you would have to drill in old bones if you wanted to compare the genetic imprint of mammoths to that of elephants, or if you wanted to see how they coped during the ice-age before they died out. Usually, the problem is that the remaining DNA samples have been scarce, and that they have been “polluted” by bacteria. But DNA from hair is very clean because it has been encapsulated in keratin, a kind of plastic membrane that protects the hair and the DNA” says Thomas Gilbert.

The centre of research has been the mitochondria. A mitochondrion is a kind of power plant in the cell, and it is very suitable for use in comparable DNA-studies of both mammals and humans.
Posted by Michael J. Ryan, Ph.D. at 9:51 AM

Last week Brenda Chinnery-Allgeier, one of the co-conveners of the Horned Dinosaur Symposium at the Royal Tyrrell Museum, and all around terrific person, was the lead author on a new basal ceratopsian published in the latest issue of the Journal of Vertebrate Paleontology

A dinosaur skeleton found 24 years ago in Montana has finally been identified as a new species that links North American dinosaurs with Asian dinosaurs. The dinosaur would have weighed 30 to 40 pounds, walked on two feet and stood about three feet tall. The fossil came from sediment that's about 80 million years old. 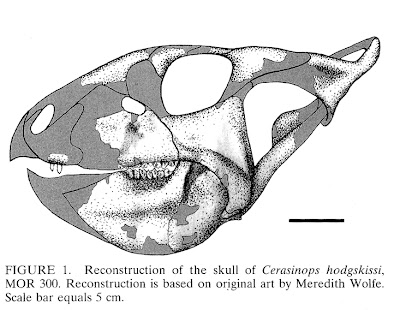 Co-author Jack Horner, curator of paleontology at Montana State University's Museum of the Rockies, said he found the nearly-complete skeleton in 1983 near Choteau, in northwest Montana, but it was located in extremely hard rock and took a long time to prepare.

"I knew it was probably a new dinosaur, but it took someone that really knew what they were doing to be able to describe it," Horner said.

The dinosaur, nicknamed Cera, was named Cerasinops hodgskissi after landowner Wilson Hodgskiss. who gave him permission to collect the skeleton for the Museum of the Rockies, Horner said. The fossil was found about five miles south of Choteau, in a different area than the famed Egg Mountain site.

The C. hodgskissi is such a simple specimen that it's hard to describe in terms of distinguishing characteristics, Horner said. Tests, however, showed that it represents a very primitive species that shares characteristics of Neo-ceratopsian dinosaurs in North America and Asia. Ceratopsian dinosaurs have horns, but these do not.
Posted by Michael J. Ryan, Ph.D. at 9:40 AM

Im In Ur Gobi Pullin Ur Tail 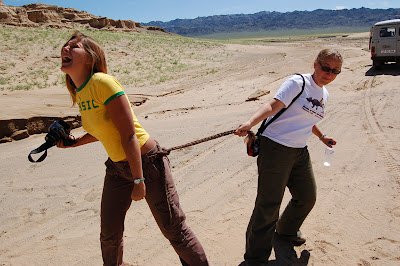 U of A VP grad students Miriam Reichel (lt) and Victoria Arbour (rgt) goof around in pass through the Hongrenel Dunes in the western gobi while we wait for the trucks to cool down (Aug. 24). Miriam had bought a camel hair rope from one of the nomads and was using it as a belt, much to everyone else's amusement.

Now that I'm more or less back from my summer adventures I'll be posting a lot of photos from my Gobi expeditions and the smashing successful recent Horned Dino conference at the RTMP in Drumheller from this past weekend.
Posted by Michael J. Ryan, Ph.D. at 12:30 PM

Fig. 1. (A) Dorsal view of right ulna of Velociraptor IGM 100/981. (B) Detail of red box in (A), with arrows showing six evenly spaced feather quill knobs. In (B), a cast of IGM 100/981 was used. (C) Dorsal view of right ulna of a turkey vulture (Cathartes). (D) Same view of Cathartes as in (C) but with soft tissue dissected to reveal placement of the secondary feathers and greater secondary coverts relative to the quill knobs. (E) Detail of Cathartes, with one quill completely removed to reveal quill knob. (F) Same view as in (E) but with quill reflected to the left to show placement of quill, knob, and follicular ligament. Follicular ligament indicated with arrow.

Abstract: Some nonavian theropod dinosaurs were at least partially covered in feathers or filamentous protofeathers. However, a complete understanding of feather distribution among theropod dinosaurs is limited because feathers are typically preserved only in lagerstätten like that of Solnhofen, Germany or Liaoning, China. Such deposits possess clear taphonomic biases toward small-bodied animals, limiting our knowledge regarding feather presence in larger members of feathered clades.

We present direct evidence of feathers in Velociraptor mongoliensis based on the presence of quill knobs on the posterior forearm. This report of secondaries in a larger-bodied, derived, and clearly flightless member of a nonavian theropod clade represented by feathered relatives is a substantial contribution to our knowledge of the evolution of feathers.
Posted by Michael J. Ryan, Ph.D. at 12:02 PM

Abstract: The Plio-Pleistocene site of Dmanisi, Georgia, has yielded a rich fossil and archaeological record documenting an early presence of the genus Homo outside Africa. Although the craniomandibular morphology of early Homo is well known as a result of finds from Dmanisi and African localities, data about its postcranial morphology are still relatively scarce. 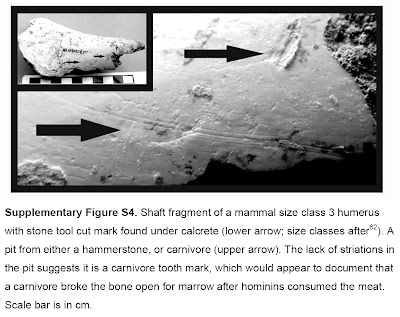 Here we describe newly excavated postcranial material from Dmanisi comprising a partial skeleton of an adolescent individual, associated with skull D2700/D2735, and the remains from three adult individuals. This material shows that the postcranial anatomy of the Dmanisi hominins has a surprising mosaic of primitive and derived features. The primitive features include a small body size, a low encephalization quotient and absence of humeral torsion; the derived features include modern-human-like body proportions and lower limb morphology indicative of the capability for long-distance travel.

Thus, the earliest known hominins to have lived outside of Africa in the temperate zones of Eurasia did not yet display the full set of derived skeletal features.
Posted by Michael J. Ryan, Ph.D. at 11:47 AM