Early Penguins & The Evolution of Birds 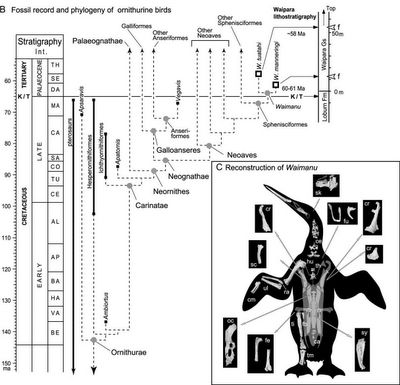 Abstract: Testing models of macroevolution, and especially the sufficiency of microevolutionary processes, requires good collaboration between molecular biologists and paleontologists. We report such a test for events around the Late Cretaceous by describing the earliest penguin fossils, analyzing complete mitochondrial genomes from an albatross, a petrel, and a loon, and describe the gradual decline of pterosaurs at the same time modern birds radiate.

The penguin fossils comprise four naturally associated skeletons from the New Zealand Waipara Greensand, a Paleocene (early Tertiary) formation just above a well-known Cretaceous/Tertiary boundary site. The fossils, in a new genus (Waimanu), provide a lower estimate of 61–62 Ma for the divergence between penguins and other birds and thus establish a reliable calibration point for avian evolution. Combining fossil calibration points, DNA sequences, maximum likelihood, and Bayesian analysis, the penguin calibrations imply a radiation of modern (crown group) birds in the Late Cretaceous. This includes a conservative estimate that modern sea and shorebird lineages diverged at least by the Late Cretaceous about 74 ± 3 Ma (Campanian).

It is clear that modern birds from at least the latest Cretaceous lived at the same time as archaic birds including Hesperornis, Ichthyornis, and the diverse Enantiornithiformes.

Pterosaurs, which also coexisted with early crown birds, show notable changes through the Late Cretaceous. There was a decrease in taxonomic diversity, and small- to medium-sized species disappeared well before the end of the Cretaceous. A simple reading of the fossil record might suggest competitive interactions with birds, but much more needs to be understood about pterosaur life histories.

Additional fossils and molecular data are still required to help understand the role of biotic interactions in the evolution of Late Cretaceous birds and thus to test that the mechanisms of microevolution are sufficient to explain macroevolution.

Note: This is an open access article that can be downloaded HERE
Posted by Michael J. Ryan, Ph.D. at 6:13 PM