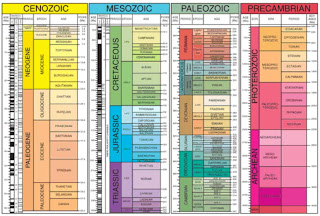 Geological Time Scale
In 1759, Italian geologist Giovanni Arduino (1714-1795) dated a letter to Professor A.Vallisneri the younger, in which Arduino proposed a classification of Earth's surface rocks according to four brackets of successively younger orders: Primary, Secondary, Tertiary and Quaternary. These are the four geological eras used today. The volcanic rocks without fossils which he saw in the Atesine Alps that formed the cores of large mountains he called Primary. Overlying them, the fossil rich rocks of limestone and clay that were found on the prealpine flanks of the mountains he called Secondary. The less consolidated fossil-bearing rocks of the subalpine foothills, he named Tertiary, and the alluvial rock deposits in the plains were the Quaternary. link
Posted by Michael J. Ryan, Ph.D. at 8:36 AM 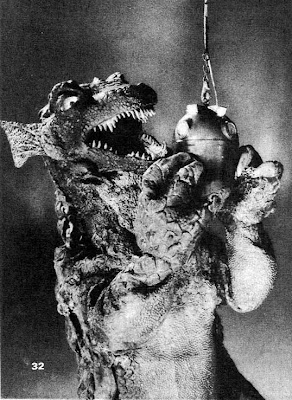 Gorgo premiered on this day in 1961. Directed by Eugène Lourié from a script by John Loring and Daniel Hyat, it featured a man in a rubber suit ala Toho’s Godzilla. More ignored than maligned, it holds up very well & is a well worth watching. Plus, it's newly available on Blu-Ray.

Over at Atomic Surgery the good doctors present a double bill to commemorate the day: a story by Steve Ditko from Gorgo #15 and a Gorgo filmbook from Famous Monsters of Filmland #50.
Posted by Michael J. Ryan, Ph.D. at 9:39 AM 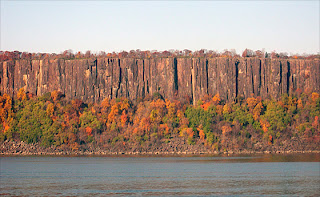 More than 200 million years ago, a massive extinction decimated 76 percent of marine and terrestrial species, marking the end of the Triassic period and the onset of the Jurassic. This devastating event cleared the way for dinosaurs to dominate Earth for the next 135 million years, taking over ecological niches formerly occupied by other marine and terrestrial species.

It’s not entirely clear what caused the end-Triassic extinction, although most scientists agree on a likely scenario: Over a relatively short period of time, massive volcanic eruptions from a large region known as the Central Atlantic Magmatic Province (CAMP) spewed forth huge amounts of lava and gas, including carbon dioxide, sulfur and methane. This sudden release of gases into the atmosphere may have created intense global warming and acidification of the oceans that ultimately killed off thousands of plant and animal species.

Now researchers at MIT, Columbia University and elsewhere have determined that these eruptions occurred precisely when the extinction began, providing strong evidence that volcanic activity did indeed trigger the end-Triassic extinction. link.
Posted by Michael J. Ryan, Ph.D. at 12:20 PM