Crick was a British biophysicist, who, with James Watson and Maurice Wilkins, received the 1962 Nobel Prize for Physiology or Medicine for their determination of the molecular structure of deoxyribonucleic acid (DNA), the chemical substance ultimately responsible for hereditary control of life functions. Crick and Watson began their collaboration in 1951, and published their paper on the double helix structure on April 2, 1953 in Nature. This accomplishment became a cornerstone of genetics and was widely regarded as one of the most important discoveries of 20th-century biology.
[ a palaeoblog autopost]
Posted by Michael J. Ryan, Ph.D. at 3:31 PM

Mendel was an Austrian pioneer in the study of heredity. He spent his adult life with the Augustinian monastery in Brunn, where as a geneticist, botanist and plant experimenter, he was the first to lay the mathematical foundation of the science of genetics, in what came to be called Mendelism.

Over the period 1856-63, Mendel grew and analyzed over 28,000 pea plants. He carefully studied for each their plant height, pod shape, pod color, flower position, seed color, seed shape and flower color. He made two very important generalizations from his pea experiments, known today as the Laws of Heredity. Mendel coined the present day terms in genetics: recessiveness and dominance. 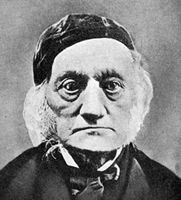 Owen was an English anatomist and paleontologist who is remembered for his contributions to the study of fossil animals and for his strong opposition to the views of Charles Darwin.

He coined the word "Dinosaur" meaning "terrible reptile" (1842). Owen synthesized French anatomical work, especially from Cuvier and Geoffroy, with German transcendental anatomy. He gave us many of the terms still used today in anatomy and evolutionary biology, including "homology". In 1856, he was appointed Superintendent of the British Museum (Natural History). Bascom was an American geologist and teacher. She was the first woman to receive a doctorate from Johns Hopkins University. Two years later she launched the geology department at Bryn Mawr. Bascom was the first woman to work as a geologist for the U.S. Geological Survey and to be made a fellow of the Geological Society of America. Bascom was an expert in crystallography, mineralogy, and petrography. She is known for inventing techniques that used microscopic analysis in the study of the oil-bearing rocks. Swimming in the Milk River after a hard day in "Club Med Bone Bed". David Eberth (background) collects a bentonite for dating from above one of the newly discovered ceratopsian bone beds in the Oldman Formation. David Evans (ROM) is in the foreground.

A few of the students working with us: Sir Arthur Conan Doyle was a British writer and creator of Sherlock Holmes. He was born in Edinburgh. His father and uncle were both book illustrators and his mother encouraged his son to explore the world of books. Doyle studied at Edinburgh University and in 1884 he married Louise Hawkins. Doyle qualified as doctor in 1885 and practiced medicine as an eye specialist in Hampshire until 1891 when he became a full time writer. Doyle's first novel about Sherlock Holmes,’ A Study in Scarlet’, was published in 1887.

During the South African war (1899-1902) Doyle served for a few months as senior physician at a field hospital, and wrote ‘The War in South Africa’, in which he defended England's policy. When his son Kingsley died from wounds incurred in World War I, the author dedicated himself in spiritualistic studies. Doyle's stories of Professor George Edward Challenger in ‘The Lost World’ (1912). The model for the professor was William Rutherford, Doyle's teacher from Edinburgh. Doyle's practice, and other experiences, expeditions as ship's surgeon to the Arctic and West Coast of Africa, service in the Boer War, defenses of George Edalji and Oscar Slater, two men wrongly imprisoned, provided much material for his writings.

The Southern Alberta Dinosaur Research Group is just finishing off the first of four weeks in southern Alberta working in the badlands adjacent to the Milk and Oldman rivers. Dr. Michael Ryan (your palaeoblogger) from the Cleveland Museum of Natural Museum and Dr. David Evans from the Royal Ontario Museum have a crew of about 15 people per week working on a series of projects including the collection of two potentially new duck-billed dinosaurs, and the on-going excavation of a juvenile duck-billed dinosaur bone bed from the Belly River Group and earlier sediments. The crews are made up of collaborators such as Dr. Nick Longrich from the U of Calgary; technician Ian Morrison, undergrad and grad students from the U of Toronto; Technician David Lloyd from the Royal Tyrrell Museum; grad students from U of Calgary and Alberta; with undergrad students from Case Western Reserve U. to arrive later this month (I’m sure that I’ve forgetting someone).

It’s been a busy week and I’ve not taken many photos but here’s a short selection: The rattler that greeted us as we set up camp. The red arrow points to the first hadrosaur quarry that we opened this week. Here the crew is removing overburden. More overburden removal in the same quarry. The specimen is the brown bone exposed in the sandstone under the hard capstone. The specimen was originally reported to Wann Langston, Jr., in 1960. David Evans takes a break in the quarry. Ian Morrison (white cap) does the impossible by fixing a broken jackhammer starter spring with a multitool. A week of jack hammering was required to take off the capstone. U of T undergrad, Jill Gallimore, rocks out in the quarry A double rainbow seen from camp after a recent evening thunderstorm.
Posted by Michael J. Ryan, Ph.D. at 6:35 PM 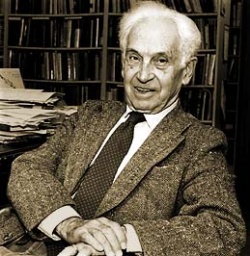 Any student of biology, or anyone with an interest in the natural world, will be familiar with Ernst Mayr who passed away on February 3rd in Bedford, Mass. Born in Kempton, Germany he joined the American Museum of Natural History as a curator in 1931. In 1953 he left the museum to work at Harvard University where he stayed until his retirement in 1975.

For anyone interested in learning more about modern evolutionary theory I’d recommend Mayr’s recent book “What Evolution Is” (2002). It’s written in an engaging and readable format from the perspective of someone who’s thought about evolution all his life.