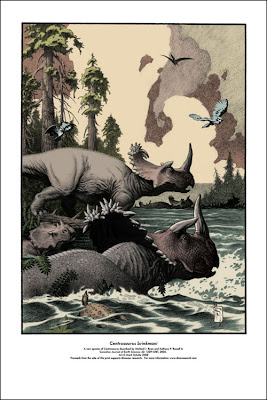 Work and other issues are forcing me to take a hopefully not-to-long break from the blog. When I return I should be giving updates from the field.

In the meantime, I'll remind you of this classy signed print by Mark Schultz. It is being used to raise money to offset the costs of students doing research with the SADRG in southern Alberta.

For more details drop me a line at palaeoblog at yahoo dot ca
Posted by Michael J. Ryan, Ph.D. at 12:01 PM

Darwinius masillae Does Not Exist (not yet at least!)

Oops! Read about it here.

The Evolutionary Utility of Junk DNA 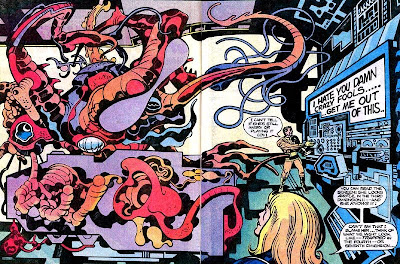 Scientists have long been perplexed by the extensive strands of genetic material that dominate the genome - junk DNA - but seem to lack specific functions. Why would nature force the genome to carry so much excess baggage?

Researchers studying the genome of a pond organism have found that DNA sequences from regions of what had been viewed as the "dispensable genome" are actually performing functions that are central for the organism. They have concluded that the 'junk' genes spur an almost acrobatic rearrangement of the entire genome that is necessary for the organism to grow.

Genes called transposons in the single-celled pond-dwelling organism Oxytricha produce cell proteins known as transposases. During development, the transposons appear to first influence hundreds of thousands of DNA pieces to regroup. Then, when no longer needed, the organism cleverly erases the transposases from its genetic material, paring its genome to a slim 5 percent of its original load.

The term "junk DNA" was originally coined to refer to a region of DNA that contained no genetic information. Scientists are beginning to find, however, that much of this so-called junk plays important roles in the regulation of gene activity. No one yet knows how extensive that role may be. link
Posted by Michael J. Ryan, Ph.D. at 8:00 AM

Mary was an English fossil collector who made her first significant discovery at the age of 11 or 12 (sources differ on the details), 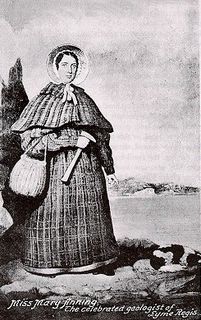 when she found a complete skeleton of an Ichthyosaurus, from the Jurassic period. The ten-meter (30 feet) long skeleton created a sensation and made her famous.
Anning's determination and keen scientific interest in fossils derived from her father's interest in fossil hunting, and a need for the income derived from them to support her family after his death. in 1810. She sold large fossils to noted paleontologists of the day, and smaller ones to the tourist trade. In 1823, Anning made another great discovery, found the first complete Plesiosaurus.

Later in her life, the Geological Society of London granted Anning an honorary membership. 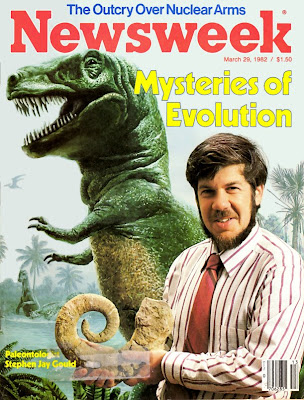 CMNH On The Move 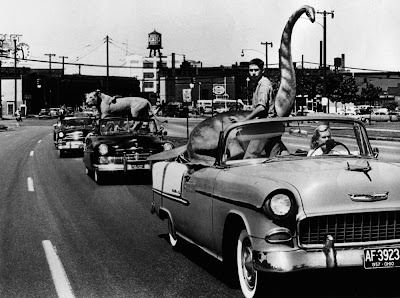 A great photo from the CMNH archives of the move in 1957 to the museum’s present location. The woman driving the convertible is Gloria Motch, the late wife of honorary trustee, Ed Motch.
Posted by Michael J. Ryan, Ph.D. at 9:24 AM 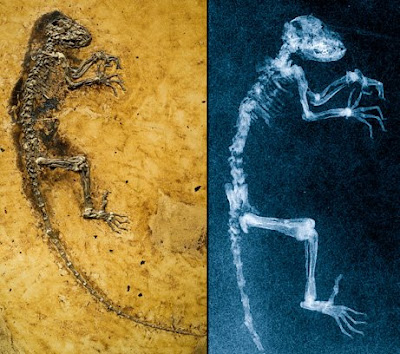 Abstract [edit]: The best European locality for complete Eocene mammal skeletons is Grube Messel, near Darmstadt, Germany. Although the site was surrounded by a para-tropical rain forest in the Eocene, primates are remarkably rare there, and only eight fragmentary specimens were known until now. Messel has now yielded a full primate skeleton. The specimen has an unusual history: it was privately collected and sold in two parts, with only the lesser part previously known. The second part, which has just come to light, shows the skeleton to be the most complete primate known in the fossil record.

The specimen is described as Darwinius masillae n.gen. n.sp. belonging to the Cercamoniinae. Skull radiography shows a host of teeth developing within the juvenile face. Investigation of growth and proportion suggest that the individual was a weaned and independent-feeding female that died in her first year of life, and might have attained a body weight of 650–900 g had she lived to adulthood. She was an agile, nail-bearing, generalized arboreal quadruped living above the floor of the Messel rain forest. 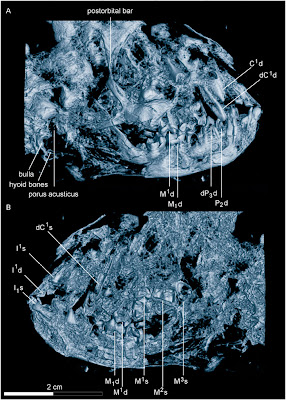 Micro-CT of the skull of Darwinius masillae
Darwinius masillae represents the most complete fossil primate ever found, including both skeleton, soft body outline and contents of the digestive tract. Study of all these features allows a fairly complete reconstruction of life history, locomotion, and diet.

Any future study of Eocene-Oligocene primates should benefit from information preserved in the Darwinius holotype. Of particular importance to phylogenetic studies, the absence of a toilet claw and a toothcomb demonstrates that Darwinius masillae is not simply a fossil lemur, but part of a larger group of primates, Adapoidea, representative of the early haplorhine diversification.

Vist the promo page for info on the upcoming book and documentary.

Thanks to Lisa for the head's up on this.

While the blog was dormant for the past few weeks I was leading a field trip through Germany. We spent a day at the Messel site and I'll post some photos of it soon.
Posted by Michael J. Ryan, Ph.D. at 8:08 AM

Debuted This Day: The Dinosaur & The Missing Link

On this day back in 1915, The Dinosaur and The Missing took its bow in US cinemas. It features the earliest work of a young Willis O'brien who would go on to bring King Kong to life.
Posted by Michael J. Ryan, Ph.D. at 3:28 PM 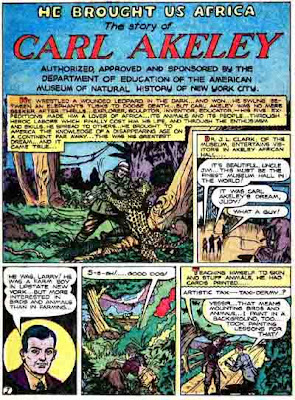 Read his story over at Atomic Surgery
The Hall of African Mammals at the American Museum of Natural History exists thanks to the efforts of Carl Akeley who was the kind of advendurer that Indy Jones could only dream of being.

He died on an African expedition in 1926, ten years before this hall was completed and was buried in a place depicted in the Hall's famous Gorilla Diorama. Of course we approach collecting and conservation differently today, but Akeley is to be commended for his love of nature and his desire to present its hidden corners to the world.

Carl Ethan Akeley was an American naturalist and explorer who developed the taxidermic method for mounting museum displays to show animals in their natural surroundings. His method of applying skin on a finely molded replica of the body of the animal gave results of unprecedented realism and elevated taxidermy from a craft to an art. He mounted the skeleton of the famous African elephant Jumbo. He invented the Akeley cement gun to use while mounting animals, and the Akeley camera which was used to capture the first movies of gorillas. 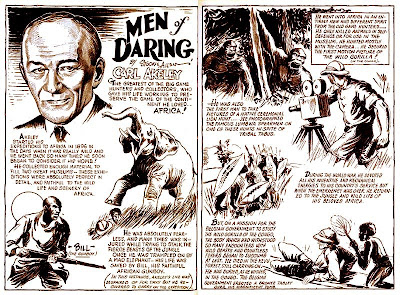