The BBC News is reporting that the ‘lost’ manuscript by Robert Hook has finally been returned to the Royal Society.

This story was previously discussed Here and Here.

The document, which had lain hidden in a house in Hampshire, was rescued from a public auction after a fundraising effort pulled in the £940,000 needed. The "white knights" 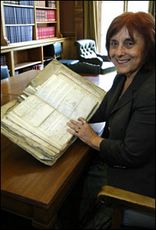 have been revealed as the Wellcome Trust, which gave £469,000, and 150 donors who came forward after the Royal Society appealed to its fellows and the general public.

The manuscript will now be rebound, transcribed and carefully analysed; and infrared scanning will be used to reveal some notes that have become illegible over time. Professor Lisa Jardine (right), a historian from Queen Mary, University of London, and biographer of Robert Hooke, was the first person to alert the Royal Society to the existence of the document. She will be working with the society to analyse the notes.

"These are the records of what happened at the Royal Society between late 1677 and late 1682. There could well be a Newton experiment in there that nobody knows about," she said.
Posted by Michael J. Ryan, Ph.D. at 9:24 AM