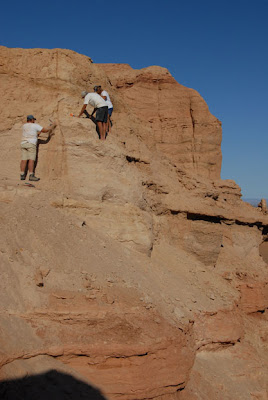 Sorry for the lack of recent updates but access to the net is limited in the Gobi.

We’ve been in the Gobi for almost 3 weeks now, with time lost at the start for the usual field preparations and truck breakdowns en route, sandstorms, lack of roads, etc. The crew size has fluctuated around 40 and includes the researchers (12), the Mongolian support crew and a film crew from NBC Korea that is doing a documentary about this year’s expedition, and various other hangers on.

Our base camp is in a region known as Khermeen Tsav, a series of deep canyons with badland exposures from the Late Cretaceous. This is the region where we finished up at the end of the 2007 field season (we only spent 7 days here at that time). If you have access to Google Earth we are at approximately N 43’ 28. 289; E 99’ 49.587. To date the site has been productive with a number of important small lizard and mammal skulls, eggs, and various dinosaurs. A few days ago one of the U of Alberta students, Phil Bell, found a disarticulated Tarbosaurus skull on the edge of a cliff at we’ve started quarrying (see above photo). Yoshi Kobayashi has also found an articulated ankylosaur that is our second big quarry. We are also collecting an ankylosaur monolith abandoned by the Russians almost 30 years ago. The Russians tended to collect their articulated skeletons by digging a trench all the way around it, building a box around the specimen, and then filing the box with plaster. Collecting these ‘monoliths’ was not a problem because they also brought bulldozers with them.

We’ve also done a number of short term remote camps, including trips to Bugeen Tsav that produced several turtle bone beds (‘ponds’), and the Nemegt Basin. We’ve had several days of rain and cold weather (~0C at night at Nemegt), but, generally it’d been hot and dry. The current plans are to be back in Ulannbaatar around Sept. 24th and I should be back in NA sometime about Oct 3.