Ismar de Souza Carvalho said that a dinosaur claw found in Brazil likely belonged to an unknown group of dinosaurs that walked the Earth some 70 million years ago. 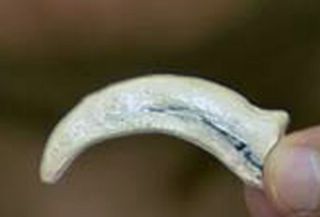 Photo:Renzo Gostoli
"The anatomic structure of this claw shows, quite possibly, the link between carnivore dinosaurs and birds that exist today,'' said Carvalho, a member of the Paleontological Investigation Center at Minas Gerais state university.

One expert expressed doubt that a claw fragment could prove the existence of a previously unknown dinosaur.

"This claw doesn't add particularly much to our knowledge of the origins of birds, but it does show that raptor dinosaurs were present in Brazil toward the end of the age of dinosaurs," Thomas R. Holtz, Jr., a vertebrate paleontologist at the University of Maryland, said Friday.

"The claw is similar in shape to that of many other raptors, such as velociraptors. But from there we can't infer it is likely a similar dinosaur.''
Posted by Michael J. Ryan, Ph.D. at 2:48 PM