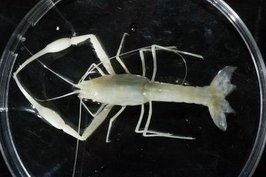 Discovery of eight previously unknown, ancient animal species within "a new and unique underground ecosystem" in Israel was revealed today by Hebrew University of Jerusalem researchers.

From the Hebrew University press release:

The researchers said the discovery came about when a small opening was found, leading to a cave extending to a depth of 100 meters beneath the surface of a quarry in the vicinity of Ramle, between Jerusalem and Tel Aviv. The quarry is operated by cement manufacturer Nesher Industries.

The cave, which has been dubbed the Ayalon Cave, is "unique in the world," said Prof. Amos Frumkin due to its isolation from the outside world -- the 2.5 km cave's surface is situated under a layer of chalk that is impenetrable to water.

The invertebrate animals found in the cave – four seawater and freshwater crustaceans and four terrestial species – are related to but different from other, similar life forms known to scientists. The species have been sent to biological experts in both Israel and abroad for further analysis and dating. It is estimated that these species are millions of years old. Also found in the cave were bacteria that serve as the basic food source in the ecosystem.

The animals found there were all discovered live, except for a blind species of scorpion, although Dr. Dimentman is certain that live scorpions will be discovered in further explorations and also probably an animal or animals which feed on the scorpions.
Posted by Michael J. Ryan, Ph.D. at 1:36 PM