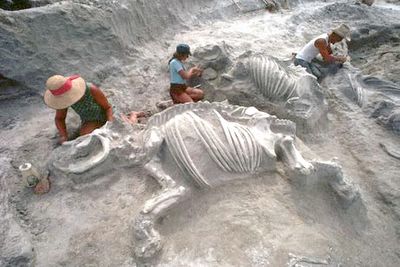 The U.S. Department of Interior has designated Nebraska's Ashfall Fossil Beds as a national natural landmark, the first such landmark to be designated in almost two decades.

The site, near the town of Neligh is home to hundreds of skeletons of extinct rhinos, camels, three-toed horses, and other vertebrates that were killed and buried by ash from a huge volcanic eruption some 12 million years ago. It is the only place on Earth where large numbers of fossil mammals have been found as whole, three-dimensionally preserved skeletons.

The Ashfall Fossil Beds were uncovered in the early 1970s by Dr. Mike Voorhies, the current curator of paleontology at the University of Nebraska State Museum in Lincoln. In 1971 he found a skull of a rhino calf protruding from an eroding ravine. The skull turned out to be part of a complete skeleton embedded in volcanic ash.

About 12 million years ago, a volcano in modern-day Idaho spread a blanket of ash over large parts of what is now the midwestern United States. A layer of this powdered glass one or two feet (one- to two-thirds of a meter) thick covered the grasslands of northeastern Nebraska. Most of the animals living in the area survived the actual ashfall, but as they continued to graze on the ash-covered grasses, their lungs began to fill with the deadly particles.
Posted by Michael J. Ryan, Ph.D. at 9:32 AM