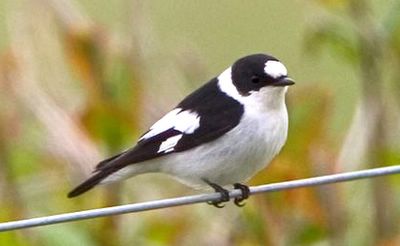 Abstract: One of the most debated questions in evolutionary biology is whether female choice of males with exaggerated sexual displays can evolve as a correlated response to selection acting on genes coding for male attractiveness or high overall viability.

To date, empirical studies have provided support for parts of this scenario, but evidence for all key genetic components in a natural population is lacking. Here we use animal-model quantitative genetic analysis on data from over 8,500 collared flycatchers (Ficedula albicollis) followed for 24 years to quantify all of the key genetic requirements of both fisherian4, 5 and 'good-genes' models6, 7 on sexual selection in the wild.

We found significant additive genetic variances of all the main components: male ornament (forehead patch size), female mate choice for this ornament, male fitness and female fitness. However, when the necessary genetic correlations between these components were taken into account, the estimated strength of indirect sexual selection on female mate choice was negligible.

Our results show that the combined effect of environmental influences on several components reduces the potential for indirect sexual selection in the wild. This study provides insight into the field of sexual selection by showing that genes coding for mate choice for an ornament probably evolve by their own pathways instead of 'hitchhiking' with genes coding for the ornament.
Posted by Michael J. Ryan, Ph.D. at 12:32 PM