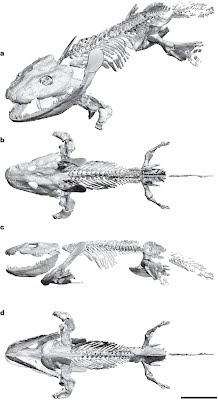 Abstract: The origin of tetrapods and the transition from swimming to walking was a pivotal step in the evolution and diversification of terrestrial vertebrates. During this time, modifications of the limbs—particularly the specialization of joints and the structures that guide their motions—fundamentally changed the ways in which early tetrapods could move. Nonetheless, little is known about the functional consequences of limb anatomy in early tetrapods and how that anatomy influenced locomotion capabilities at this very critical stage in vertebrate evolution.

Here we present a three-dimensional reconstruction of the iconic Devonian tetrapod Ichthyostega and a quantitative and comparative analysis of limb mobility in this early tetrapod. We show that Ichthyostega could not have employed typical tetrapod locomotory behaviours, such as lateral sequence walking. In particular, it lacked the necessary rotary motions in its limbs to push the body off the ground and move the limbs in an alternating sequence.

Given that long-axis rotation was present in the fins of tetrapodomorph fishes, it seems that either early tetrapods evolved through an initial stage of restricted shoulder and hip joint mobility or that Ichthyostega was unique in this respect. We conclude that early tetrapods with the skeletal morphology and limb mobility of Ichthyostega were unlikely to have made some of the recently described Middle Devonian trackways. 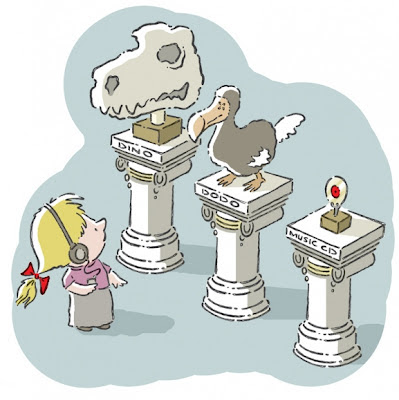 image
(Jean) Louis (Rodolphe) Agassiz (May 28, 1807 - Dec. 14, 1873) was a Swiss-born U.S. naturalist, geologist, and teacher who made revolutionary contributions to the study of natural science with landmark work on glacier activity and extinct fishes. Agassiz began his work in Europe, having studied at the University of Munich and then as chair in natural history in Neuchatel in Switzerland. While there he published his landmark multi-volume description and classification of fossil fish.

In 1846 Agassiz came to the U.S. to lecture before Boston's Lowell Institute. Offered a professorship of Zoology and Geology at Harvard in 1848, he decided to stay, becoming a citizen in 1861. His innovative teaching methods altered the character of natural science education in the U.S. Link

Book Review: Across Atlantic Ice: The Origin of America’s Clovis Culture by Dennis J. Stanford and Bruce A. Bradley 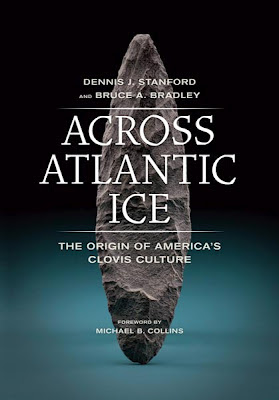 
The Palaeoblog occasionally gets sent books to review which we get around to doing eventually. This one, dealing with the origins of the first Americans, falls more under archaeology than palaeontology, so I've asked the Cleveland Museum of Natural History's John Otis Hower Chair of Archaeology, Dr. Brian Redmond, to review this for us. Thanks Brian!

Who were the first Americans? When did they come to the New World and by what routes? These questions have maintained a featured place in archaeological inquiry since the era of Thomas Jefferson, the recognized father of American Archaeology. This much-awaited book by two leading Paleoindian scholars argues for an origin, not from northeastern Asia as conventionally proposed, but across the north Atlantic from Iberia during the late glacial maximum, some 20,000 years ago. Using detailed, but not overly technical, presentations of late Pleistocene stone tool assemblages from Siberia to Chesapeake Bay, the authors state their case for the origin of the classic Clovis tool kit in eastern North America from Upper Paleolithic, Solutrean, migrants from Europe. Bradley uses his substantial experience as a stone tool analyst and flint-knapper to point out the intriguing similarities between bifacially-flaked spear and knife points found on both sides of the Atlantic. But most previous scholars have judged such a connection untenable due to the three to twelve thousand years that separated Solutrean from Clovis hunters. To fill the gap, Stanford and Bradley cite a growing body of archaeological evidence for a “pre-Clovis” occupation of eastern North America as early as 25,000 years ago. This overview of the evidence is highly informative, well-illustrated, and brings to print the newest data for Clovis progenitors in the mid-Atlantic region. The authors even make a good case that Solutrean seal hunters from Europe could have migrated north and west along the north Atlantic ice front and ended up in North America. Much less convincing is their claim for real historical affinity between Solutrean, pre-Clovis, and Clovis. In the end, the still sketchy pre-Clovis data base severely weakens the argument. But the book remains a fascinating and informative read for all students of the earliest American history.

A Middle Jurassic abelisaurid from Patagonia and the early diversification of theropod dinosaurs. 2012. D. Pol and O. Rauhut. Royal Society B: Biological Sciences. Published online before print May 23. 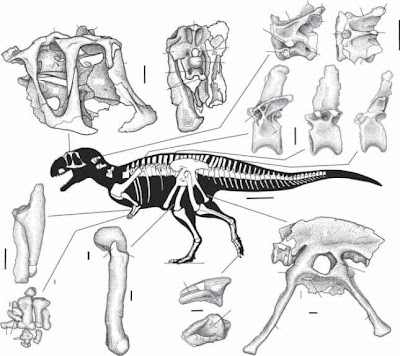 Abstract: Abelisaurids are a clade of large, bizarre predatory dinosaurs, most notable for their high, short skulls and extremely reduced forelimbs. They were common in Gondwana during the Cretaceous, but exceedingly rare in the Northern Hemisphere. The oldest definitive abelisaurids so far come from the late Early Cretaceous of South America and Africa, and the early evolutionary history of the clade is still poorly known.

Here, we report a new abelisaurid from the Middle Jurassic of Patagonia, Eoabelisaurus mefi gen. et sp. nov., which predates the so far oldest known secure member of this lineage by more than 40 Myr. The almost complete skeleton reveals the earliest evolutionary stages of the distinctive features of abelisaurids, such as the modification of the forelimb, which started with a reduction of the distal elements.

The find underlines the explosive radiation of theropod dinosaurs in the Middle Jurassic and indicates an unexpected diversity of ceratosaurs at that time. The apparent endemism of abelisauroids to southern Gondwana during Pangean times might be due to the presence of a large, central Gondwanan desert. This indicates that, apart from continent-scale geography, aspects such as regional geography and climate are important to reconstruct the biogeographical history of Mesozoic vertebrates.
Posted by Michael J. Ryan, Ph.D. at 11:08 AM 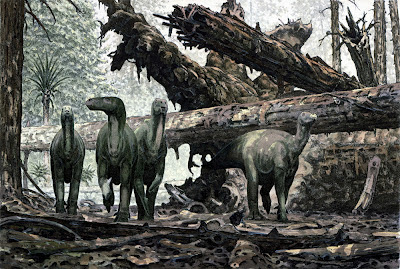 After a seemingly long public absence, Doug Henderson is now on Facebook and selling signed prints and original art through Ebay (earthistory2ktz). You can probably also find him on either site by searching his name.