Just when it looked like biologists had finally settled on the true placement of sea spiders on the evolutionary tree, a new study of these bizarre arthropods has come to a dramatically different conclusion. The findings may bring scientists a step closer to understanding how evolution produced today's immense diversity of invertebrates. 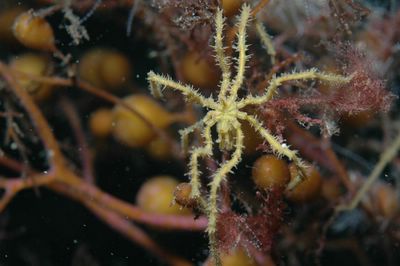 From John Bohannon at ScienceNow:

Biologists traditionally place the sea spider within the same group as spiders and scorpions because its frontal grabbing appendages are similar to arachnids' muscular mouth appendages, called chelicerae. But whereas chelicerae grow out of the middle part of arachnid heads, sea spider grabbers seem to sprout from the front. Because the only arthropods with appendages mounted on the front of their heads are extinct species from 500 million years ago, it seemed likely that sea spiders are living fossils that have retained an extra head segment adorned with appendages.

The living fossil theory got a boost last fall with a study of sea spider development led by Amy Maxmen, a biologist at Harvard University who found that the nerves that control the larvae’s frontal grabbers are wired up to the frontmost part of the brain rather than to the middle, as they are in arachnids.

But a new study by Muriel Jager of the expression of the gene called ‘Deformed’ indicates that sea spider frontal grabbers are indeed modified versions of the chelicerae of today's spiders rather than primitive frontal appendages from days of yore. The strange positioning of the grabber nerves may be due to a rearrangement of the brain during sea spider evolution rather than an extra head segment lost in all other arthropod species.
Posted by Michael J. Ryan, Ph.D. at 12:24 PM