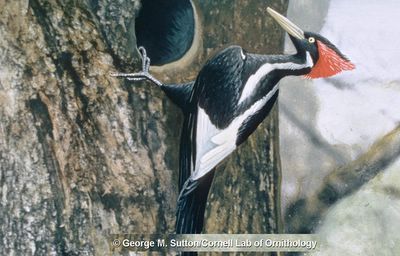 More than 100 volunteers and full-time researchers went through the swamps of eastern Arkansas during the winter but failed to find additional clues of the bird's existence.

"Certainly we're somewhat disappointed," said Ron Rohrbaugh of the Cornell University Lab of Ornithology in Ithaca, New York. But the lack of evidence "doesn't mean the bird's not there," Rohrbaugh said.

If new evidence about the woodpecker is discovered, state and federal agencies can reimpose restrictions on access, said Dennis Widner, manager of the wildlife management area.

A kayaker reported spotting the woodpecker on February 11, 2004 along the Cache River. Researchers later recorded videotape and audio recordings of the bird, one of six North American bird species thought to have become extinct since 1880.

Some have challenged whether the bird was actually spotted. David A. Sibley, a bird illustrator from Concord, Massachusetts, wrote earlier this year the video is not good enough to see the white stripes on the bird's back that would prove it is ivory-billed.
Posted by Michael J. Ryan, Ph.D. at 10:14 AM