How The Whale Lost His Legs 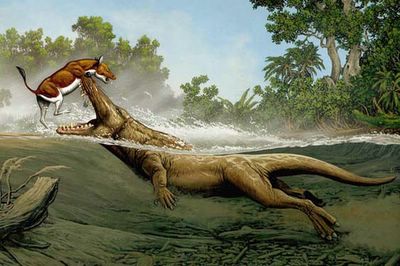 Ambulocetus; reconstruction of an early close cousin of whales. © Carl Buell.
From the NSF press release:

Reseachers report that ancient whales--four-footed land animals not unlike large modern dogs--evolved into graceful, streamlined swimmers through a series of small genetic changes during the whales' embryonic development.

Thewissen and his colleagues began by exploring the embryonic development of whales' cousins, the dolphins. These creatures are intriguing because for a brief time during development they do sprout hind limbs, which quickly vanish again as the embryos reach the second month in a gestation period that lasts about 12 months.

In most mammals, explains Thewissen, "a series of genes is at work at different times, delicately interacting to form a limb with muscles, bones, and skin. In dolphins, however, at least one of the genes drops out early in the race ultimately leading to the regression of the animals' hind limbs. By analyzing dolphin embryos, Thewissen showed that the dropout is a gene called "Sonic Hedgehog," which is important at several stages of limb formation.

In whales, however, the story is more complex. Between 41 million and 50 million years ago, whales' hind limbs did shrink greatly as the former land animals began a return to the sea. But their legs showed no change in the basic arrangement and number of bones, which proved that Sonic Hedgehog was still functioning. Its loss must have come later. The dramatic loss of Sonic Hedgehog expression was not the genetic change that drove hind limb loss in whales.

Instead, Thewissen and his colleagues conclude, whales' hind limbs regressed over millions of years via "Darwinian microevolution": a step-by-step process occurring through small changes in a number of genes relatively late in development.