The Johns Hopkins Newsletter as a short interview with Dr. Dave Weishampel conducted by Sam Engel. Here’s an excerpt:

"I'm not one of those gifted namers of dinosaurs. Most recently I named something called Zalmoxes. 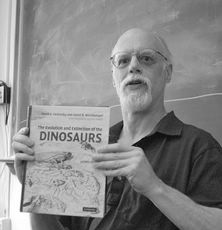 It's a fat, yet reasonably small, herbivorous dinosaur, also an ornithopod, and it comes from Transylvania. Zalmoxes was a major deity of the Dacian people, who are thought to be the original inhabitants of Transylvania. Zalmoxes advocated things like vegetarianism, and my guys a plant-eater, and he was supposed to be the god of the underworld, and we had to dig him up. It's a lovely guy. It was a real thrill. Transylvanian dinosaurs come out in dribs and drabs out of the rock and so it was really nice to be able to create the animal from isolated parts."
Posted by Michael J. Ryan, Ph.D. at 10:03 AM