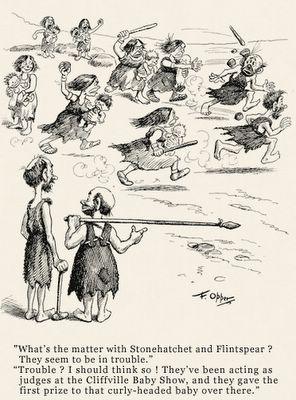 A survey of British skulls from the early part of the New Stone Age, or Neolithic, shows societies then were more violent than was supposed.

Early Neolithic Britons had a one in 20 chance of suffering a skull fracture at the hands of someone else and a one in 50 chance of dying from their injuries. Blunt instruments such as clubs were responsible for most of the trauma. 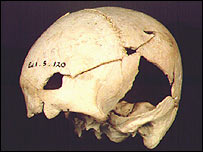 from the University of Central Lancashire looked at skulls spanning the period from 4000 BC to 3200 BC.

This is not the first time human-induced injuries have been identified in Neolithic people. But the authors say it is the first study to give some idea of the overall frequency of such trauma.

"But it was a much more violent society."

Details were presented at a meeting of the Society for American Archaeology and reported in New Scientist magazine. The research originally appeared in the Proceedings of the Prehistoric Society journal.
Skull Photo © Rick Schulting
Posted by Michael J. Ryan, Ph.D. at 9:19 AM