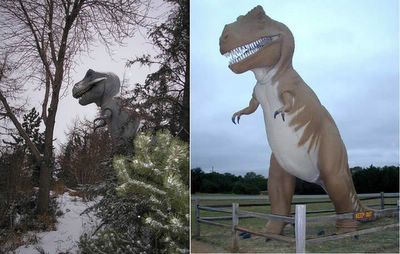 In 2004 Kipling West did this painting for the Artists Trust Auction in Seattle. 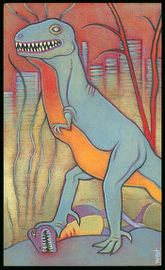 When she posted the painting on her site she accompanied it with this statement, “In 1934 John Kanerva began his life’s work, building the first of more than 50 life-sized dinosaurs at the Calgary Zoo. They were cutting edge, but soon science progressed and made the models obsolete. They were replaced with models made from the Sinclair Oil Exhibit dinosaurs (1964-65 New York World's Fair) in 1983. Today, only one of the original dinosaurs remains. "Dinny", a 'Brontosaurus', was declared an Alberta Historical Resource in 1987.” (factual info from here).

That generated an interesting series of exchanges with Kanerva's grandson.

Paraphrasing an e-mail from Kipling’s hubby,Tom Bagley: “He appears to have been upset over who got credit for designing the old Sinclair Oil logo, the New York World's Fair dinosaurs and the newer dinosaurs at the current Zoo park. Kipling had stated the Calgary dinos were replicas of the models at the 1964/65 World's Fair Dinoland exhibit. This seems to be at least partially true, as the first models few do indeed share a striking resemblance with work that came from the Louis Paul Jonas shop, which did indeed manufacture copies that have been displayed around the continent. I recall climbing on a Triceratops model as kid in Niagara Falls in 1973, that was pretty much identical to the original World's Fair one, and to one of the two Triceratops currently on display at the Zoo. The later fiberglass models at the Zoo are obviously original works, which according to Kanerva's grandson were created locally by a firm called PML Exhibits.

Apparently a book is being prepared about the old dinos, but he seems to remain adamant that the claim about the World's Fair copies is totally wrong."

And, just for fun, a photo of Tom in this younger days with his brother at the Calgary Zoo: 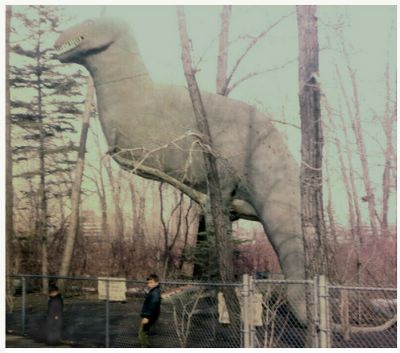