New Musings On The Origin of Life

From the U of Chicago press release:

A new paper argues against the widely held theory that the origin of life began with the spontaneous appearance of a large, replicating molecule such as RNA.

Instead, Shapiro raises an alternative that does not depend on a "stupendously improbable accident," presenting the more plausible idea that life began within a mixture of simple organic molecules, multiplied through catalyzed reaction cycles and an external source of available energy.

Shapiro outlines how replicator theories, though they have been supported by "prebiotic" syntheses carried out by chemists using modern apparatus and purified reagents, are highly unlikely. The creation of a molecule that can self-replicate requires the combination of diverse 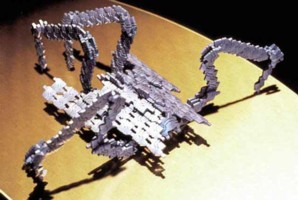 chemicals in a long sequence of reactions in a specific order, interspersed by complicated separations, purifications, and changes in locale.

Instead, Shapiro introduces the idea of a "driver" reaction, linked to a free energy source, that helps convert an unorganized mixture into a organized, self-regulated metabolic network.

"If we wish a more plausible origin of life, then we must work with the assumption that life began, somehow, among one of the mixtures of simple organic molecules that are produced by abiotic processes," writes Shapiro. "Nature will be instructing us, rather than we attempting to impose our schemes onto it."

"Small Molecule Interactions Were Central to the Origin of Life." Robert Shapiro, The Quarterly Review of Biology, June 2006.
Posted by Michael J. Ryan, Ph.D. at 7:29 PM