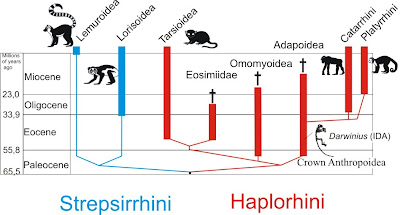 A new investigation of the skeleton of Darwinius masillae, known as ‘Ida’, confirms and strengthens earlier conclusions of the team working on the fossil.

Researchers have presented several cladistic analyses reaffirming Darwinius as a haplorhine primate related to anthropoid or higher primates (monkeys and apes). The new study discusses and refutes studies by Seiffert and others (2009) in Nature, and Williams and others (2010) in Journal of Human Evolution that sought to dismiss Darwinius as a strepsirrhine primate (related to lemurs and lorises).

Darwinius is now placed within the anthropoid line of primate evolution. One of the new cladistic analyses was made by excluding fossil taxa consisting only of small fragments like single teeth or jaws. This led to a more robust result with many fewer and more strongly supported cladistic trees.

More on the research and story behind Darwinius masillae.

Thanks to Jorn for sending me the press release.
Posted by Michael J. Ryan, Ph.D. at 3:55 PM

Biogeographic and evolutionary implications of a diverse paleobiota in amber from the early Eocene of India. 2010. J. Rust, et al. PNAS, Published online before print October 25. 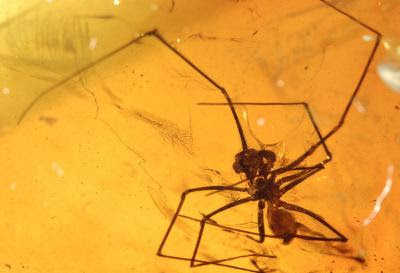 David Grimaldi/AMNH
Bees, termites, spiders, and flies entombed in a newly-excavated amber deposit are challenging the assumption that India was an isolated island-continent in the Early Eocene, or 52-50 million years ago. Arthropods found in the Cambay deposit from western India are not unique—as would be expected on an island—but rather have close evolutionary relationships with fossils from other continents. The amber is also the oldest evidence of a tropical broadleaf rainforest in Asia.

Amber from broadleaf trees is rare in the fossil record until the Tertiary, or after the dinosaurs went extinct. It was during this era that flowering plants rather than conifers began to dominate forests and developed the ecosystem that still straddles the equator today. The new amber, and amber from Colombia that is 10 million years older, indicates that tropical forests are older than previously thought.

The amber has been chemically linked to Dipterocarpaceae, a family of hardwood trees that currently makes up 80 percent of the forest canopy in Southeast Asia. ossilized wood from this family was found as well, making this deposit the earliest record of these plants in India and showing that this family is nearly twice as old as was commonly believed. It most likely originated when portions of the southern supercontinent Gondwana were still connected. link
Posted by Michael J. Ryan, Ph.D. at 8:03 PM

The Emergence of Modern Humans in East Asia 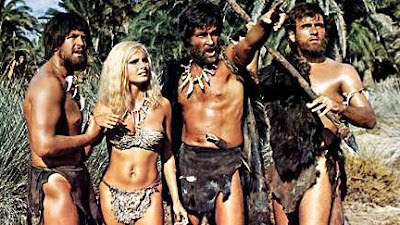 The Zhirendong fossils have a mixture of modern and archaic features that contrasts with earlier modern humans in east Africa and southwest Asia, indicating some degree of human population continuity in Asia with the emergence of modern humans.

The Zhirendong humans indicate that the spread of modern human biology long preceded the cultural and technological innovations of the Upper Paleolithic and that early modern humans co-existed for many tens of millennia with late archaic humans further north and west across Eurasia. link
Posted by Michael J. Ryan, Ph.D. at 8:00 PM 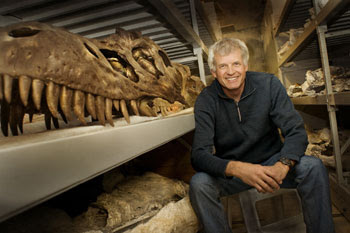 Philip Currie was invested into the Alberta Order of Excellence in a ceremony in Edmonton on Wednesday, October 20. Congratulations on a well deserved honour!

From the web site:

Dr. Phil Currie is an internationally renowned palaeontologist whose scientific accomplishments have led to a greater understanding of dinosaurs and their historic significance. He was instrumental in the development of Alberta’s Royal Tyrrell Museum and has made major contributions to palaeontology on both the Canadian and the world stage through his extensive field work, academic research, writing and teaching. 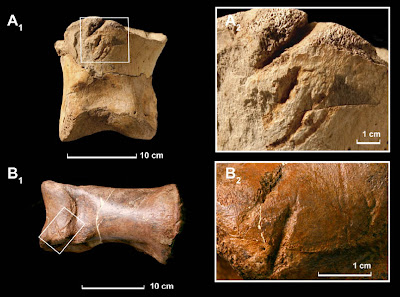 The marks are definitely the result of feeding, although scientists aren’t sure whether they are the result of scavengers or the end result of fighting, Longrich said, adding that if two T. rex fought to the death, the victor might have made a meal out of his adversary. “Modern big carnivores do this all the time,” he said. “It’s a convenient way to take out the competition and get a bit of food at the same time.”

However, the marks appear to have been made some time after death, Longrich said, meaning that if one dinosaur killed another, it might have eaten most of the meat off the more accessible parts of the carcass before returning to pick at the smaller foot and arm bones. link
Posted by Michael J. Ryan, Ph.D. at 7:41 AM

Rafinesque (Oct 22, 1783 – Sept. 18, 1840) was a naturalist, traveler, and writer who made major and controversial contributions to botany and ichthyology. Rafinesque believed that each variety of a species is a "deviant," which, through reproduction, may become a permanent species; thus, he anticipated, to some extent, part of Charles Darwin's theory of evolution.

Although Rafinesque's scientific abilities were recognized in his lifetime, he was also severely criticized for sometimes doing careless work and for his tendency to establish new genera and species. Throughout his life he traveled extensively, collected specimens wherever he went, and wrote and published constantly. From Today In Science History

Murchison (Feb. 19, 1792 - Oct. 22, 1871) was a Scottish geologist who first differentiated the Silurian strata in the geologic sequence of Early Paleozoic strata (408-540 million years old). He believed in fossils as primary criteria. In 1831, he began researching the previously geologically unknown graywacke rocks of the Lower Paleozoic, found underlying the Old Red Sandstone in parts of Wales, which culminated in his major work the Silurian System (1839). 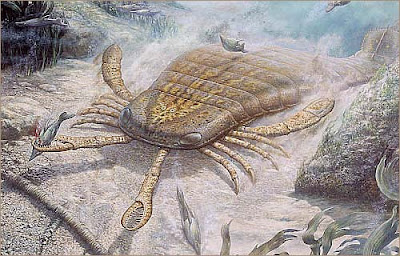 An eurypterid, a prehistoric sea scorpion from PBS.org.
Murchison named the Silurian after an ancient British tribe that inhabited South Wales. He established the Devonian working with Adam Sedgwick (1839). He named the Permian (1841) after the Perm province in Russia where he made a geological survey in 1840-45. link
Posted by Michael J. Ryan, Ph.D. at 7:21 AM

Evolution of Sexual Organs in Plants 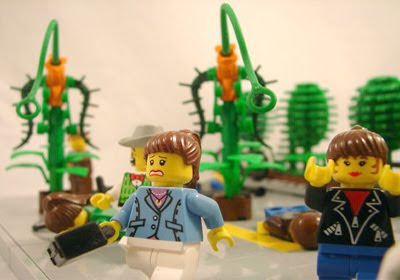 The Day of The Triffids in Lego

New research has uncovered a snapshot of evolution in progress, by tracing how a gene mutation over 100 million years ago led flowers to make male and female parts in different ways.

In a number of plants, the gene involved in making male and female organs has duplicated to create two, very similar, copies. In rockcress (Arabidopsis), one copy still makes male and female parts, but the other copy has taken on a completely new role: it makes seed pods shatter open. In snapdragons (Antirrhinum), both genes are still linked to sex organs, but one copy makes mainly female parts, while still retaining a small role in male organs – but the other copy can only make male.

"Snapdragons are on the cusp of splitting the job of making male and female organs between these two genes, a key moment in the evolutionary process," says Brendan Davies.

By tracing back through the evolutionary 'tree' for flowering plants, the researchers calculate the gene duplication took place around 120 million years ago. But the mutation which separates how snapdragons and rock cress use this extra gene happened around 20 million years later.

"Our research is an excellent example of how a chance imperfection sparks evolutionary change. If we lived in a perfect world, it would be a much less interesting one, with no diversity and no chance for new species to develop." link
Posted by Michael J. Ryan, Ph.D. at 2:02 PM 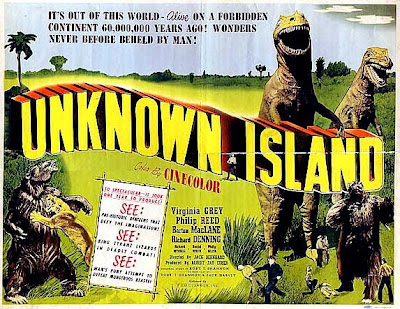 image
Written by Robert T. Shannon and directed by Bernhard, this ridiculaous little film features some of the worst ‘man dressed up as a T. rex’ effects ever. Not a bad little story though.

Dispersal and diversity in the earliest North American sauropodomorph dinosaurs, with a description of a new taxon. T. Rowe, et al. Proc. R. Soc. B published online before print October 6, 2010 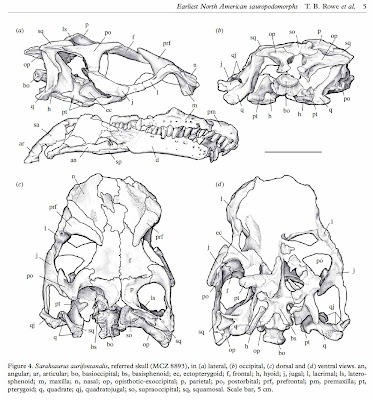 A new sauropodomorph from Arizona, Sarahsaurus aurifontanalis, lived about 190 million years ago (Early Jurassic Period) and was 14 feet long and weighed about 250 pounds.

Evidence from Sarahsaurus and two other early sauropodomorphs suggests that each migrated into North America at the end of the Triassic Period 200 million years ago in separate waves long after the Triassic extinction, and that no such dinosaurs migrated there before the extinction.

Sarahsaurus had physical traits usually associated with gigantic animals. For example, its thigh bones were long and straight like pillars, yet were not much larger than a human's thigh bones. Sarahsaurus shows that sauropodmorphs started out small and later evolved to a very large size. 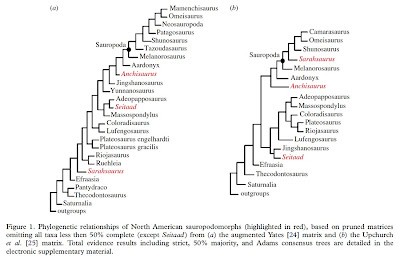 Click to Enlarge
"We've never found anything like this in western North America," he said. "Its hand is smaller than my hand, but if you line the base of the thumbs up, this small hand is much more powerfully built than my hand and it has these big claws. It's a very strange animal. It's doing something with its hands that involved great strength and power, but we don't know what."

Sarahsaurus is named in honor of Sarah (Mrs. Ernest) Butler, an Austin philanthropist and long time supporter of the arts and sciences. Butler chaired a fundraising committee for the Dino Pit, an interactive exhibit Rowe helped create at the Austin Nature and Science Center that encourages children to dig up their own fossil replicas.

"I told her if she really raised a million dollars to build the Dino Pit, I'd name a dinosaur after her," he said. link
Posted by Michael J. Ryan, Ph.D. at 8:25 AM 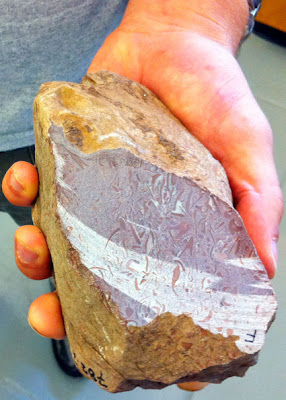 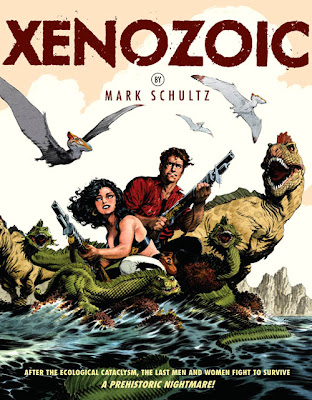 Welcome to the Xenozoic Age, a post-apocalyptic landscape where dinosaurs roam freely…and humanity is the endangered species!

Coming in about a month or sooner will be the complete Xenozoic Tales by Mark Schultz, gathered together for the first time under one cover with the slightly modified title of Xenozoic . The package is designed by the award-winning Randy Dahlk & features a new cover and chapter heading art by Schultz. I’ve seen the 1st copy off the press and the book looks terrific, with superb art reproduction that shows off the tonal qualities Mark’s inks.

You can order your copy from Flesk Publications
Posted by Michael J. Ryan, Ph.D. at 4:53 PM 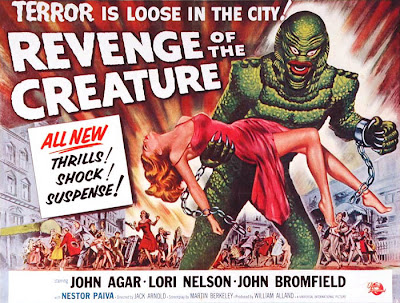 Jack Arnold (Oct. 14, 1916 - March 17, 1992) directed a number of classic SF films including The Creature From the Black Lagoon, Revenge of the Creature, The Incredible Shrinking Man, and It Came From Outer Space, as well as few not-so-classics (but still much loved) such as Monster on Campus. Throughout the ‘60’s and into the early 80’s he had a successful career as a TV producer and director.
Posted by Michael J. Ryan, Ph.D. at 4:16 PM