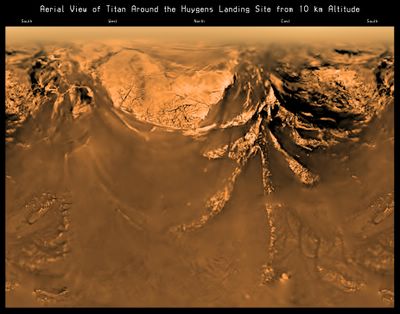 No, it’s not palaeo but it is very cool science, and well worth your attention:

Watch videos of Huygens descending to and landing on Titan HERE.

A little more than one year after the spectacular descent of ESA’s Huygens on Saturn’s giant moon Titan, scientists from the probe’s Descent Imager/Spectral Radiometer (DISR) have released two new movies of the descent. These represent the best visual product from the mission obtained so far and the most realistic way yet to experience the landing on a far-away world.

The first movie ‘View from Huygens on 14 January 2005’ shows in 4 minutes 40 seconds what the probe actually ‘saw’ within the few hours of the descent and the eventual landing. "At first the Huygens camera just saw haze over the distant surface," said DISR team member Erich Karkoschka, from the DISR team at the University of Arizona and creator of the movies.

The second, more technical movie (called ‘DISR movie’), shows DISR's 4-hour operating life in less than five minutes, too. A detailed caption to explain how the movie is structured is provided with the video.
Posted by Michael J. Ryan, Ph.D. at 3:31 PM