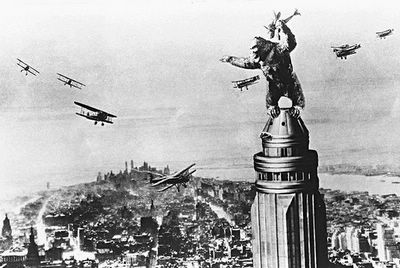 The Empire State Building, once the tallest building in the world and again the tallest in New York City, is turning 75 years old on Monday.

Construction of the Empire State Building was one of the most remarkable feats of the 20th century. It took only 410 days to build -- by 3,400 workers, many of them desperate for work at the height of the Depression. The work force was made up largely of immigrants, along with hundreds of Mohawk Indian iron workers.

The 1,453-foot tower opened on May 1, 1931, with President Herbert Hoover pressing a button in Washington to turn on its lights. Architect William Lamb, the chief designer, messaged former New York Gov. Al Smith from a ship at sea: "One day out and I can still see the building."

Along with "Kong" movies, the skyscraper was featured in such films as "An Affair to Remember" and "Sleepless in Seattle." In one of Japan's "Godzilla" films, the flying monster Rodan borrowed King Kong's perch to wail at the moon.