A mysterious skull discovered on the edge of the Arctic Circle has sparked interest in what creatures roamed Baffin Island in the distant past, and what life a warming climate may support in the future. 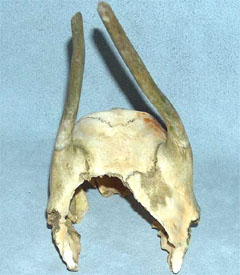 Andrew Dialla, a resident of Pangnirtung, Nunavut, says he found the skull protruding from the frozen tundra during a walk near the shore with his daughter about a month ago.

The horned skull is about the size of a man's fist. It resembles a baby caribou skull, except at that age, a caribou wouldn't have antlers, researchers and elders have pointed out.

Its discovery has caused a stir in Canada's Eastern Arctic. Pictures of the skull, sent over e-mail, have prompted residents to speculate whether the skull might belong to a long-extinct deer or sheep that inhabited the land millions of years ago when the climate was much warmer.

Meanwhile, Dialla is considering shipping the skull south to be examined by Richard Harrington, a distinguished retired paleontologist from Ottawa's Museum of Nature. Harrington has spent over a decade helping to excavate an ancient beaver pond on Ellesmere Island in Canada's High Arctic.

That site, estimated to be four million years old, contained the remains of a now-extinct species of beaver, as well as vanished species of deer, horses, wolverines and bears.

Note: this innocuous post seems to have created a bit of a ripple on the list servers. Once we come up with a reasonable taxonomic assignment I’ll post it here.

TA DA! As we all suspected: A caribou!