Human & Chimps May Have Interbred

The evolutionary split between humans and our nearest evolutionary cousins, chimpanzees, may have occurred more recently than we thought — leading to the controversial theory that our two sets of ancestors may have interbred many thousands of years after first parting company. 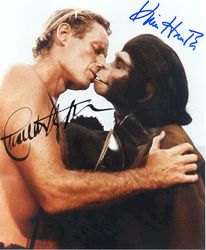 flowering of the human branch of the evolutionary tree — but which now may have to be reclassified as coming from a time before our split with the rest of the apes.

Previous estimates put the split at as much as 7 million years ago — meaning that Toumaï, a fossil dating from at least 6.5 million years ago in Chad and assigned to the species Sahelanthropus tchadensis, was hailed as the earliest-known member of the line that gave rise to modern humans.

But researchers now calculate that the split may have occurred no more than 6.3 million years ago, and possibly as recently as 5.4 million. That would make Toumaï older than the time of the split.

The researchers make their claim after comparing the genetic codes of humans, chimpanzees, gorillas and other primates in unprecedented detail — more than 20 million DNA 'letters' in all. By checking the differences between different species' DNA sequences, they were able to estimate the time since they first diverged.
Posted by Michael J. Ryan, Ph.D. at 12:33 PM