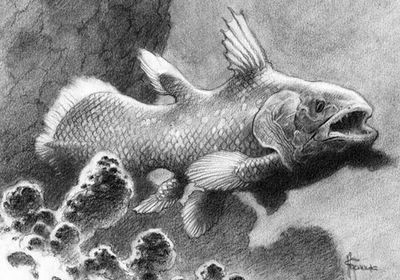 The repeated copying of a small segment of DNA in the genome of a primeval fish may have been crucial to the transition of ancient animals from sea to land.

The discovery is "tantalizing evidence" that copied DNA elements known as retroposons could be an important source of evolutionary innovations. Haussler and his colleagues were led to the discovery through their work on what they call "ultraconserved elements" -- segments of DNA hundreds of nucleotides long that are almost exactly the same in a wide variety of vertebrate organisms.

Comparing one sequence to other species also turned up a big surprise. When the researchers compared the human ultraconserved element to all the DNA sequences in the public database GenBank, the closest match was to DNA from the coelacanth. The coelacanth is a descendant of the ancient marine organism that gave rise to the terrestrial vertebrates more than 360 million years ago, yet the two organisms still share critical DNA sequences.

Bejerano and Haussler's results support the hypothesis that the movement of retroposons can generate evolutionary experiments by adding new regulatory modules to genes. Most of these experiments will have no effects or will harm an organism. But every once in a while, the movement of a regulatory element will give an organism an evolutionary advantage. "And to the extent that [such changes] improve the fitness of an organism," says Haussler, "they eventually will become fixed in a population."
Posted by Michael J. Ryan, Ph.D. at 12:37 PM