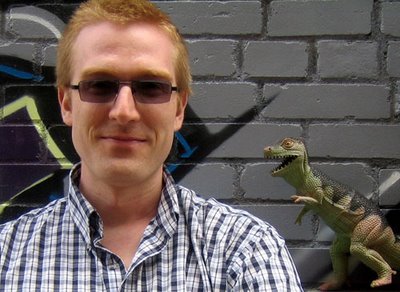 Can you still call yourself a webcartoonist if you don't actually draw your own strip?

Toronto resident Ryan North proves that the answer is a resounding "yes". Three years ago, he launched Dinosaur Comics, the conversational adventures of T-Rex and his friends Dromeceiomimus and Utahraptor, where characters a are rendered in archaic clip art and the panel structure never changes. Dinosaur Comics' popularity has been increasing ever since: Ryan's site averages 70,000 hits per day and he supports himself financially through t-shirt and book sales. The former computer science student now spends his days answering fan-mail, working on several internet-related side projects, and talking to Torontoist over soup and sandwiches.

Read the interview with North in The Torontoist HERE.
Posted by Michael J. Ryan, Ph.D. at 10:16 AM