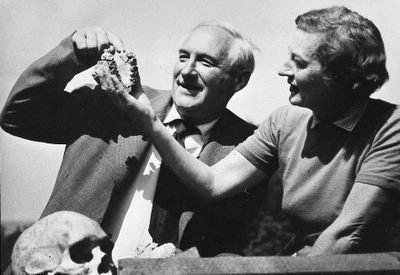 Louis and Mary Leakey
From Today In Science History:

Leakey (Aug 7, 1903 – October 1, 1972), an archaeologist and anthropologist, was born in Kabete, Kenya, of English missionaries parents. Leakey was largely responsible for convincing scientists that Africa, rather than Java or China, was the most significant area to search for evidence of human origins. Leakey led fossil-hunting expeditions to eastern Africa from the 1920's.

He married Mary D. Nicol in 1936 and the couple discovered many important fossils together. In 1964, on an expedition to the Olduvai Gorge in Tanzania, he found fossil remains of, he believed, the earliest member of the genus of human beings. He named the species Homo habilis.
Posted by Michael J. Ryan, Ph.D. at 1:23 PM

In 1769, The La Brea Tar Pits in Los Angeles, California were first noticed by a Spanish expedition. Juan Crespi, a Franciscan friar with the expedition of Gaspar de Portola (the first Spanish governor of the Californias), in 1769-70, wrote "The 3rd, we proceeded for three hours on a good road; to the right were extensive swamps of bitumen which is called chapapote. We debated whether this substance, which flows melted from underneath the earth, could occasion so many earthquakes."

The name La Brea comes from the Spanish word for "tar." A scientific publication first recorded the fossils found there in 1875, the work of Professor William Denton. Evidence exists that prehistoric native Americans used and traded the asphalt. From Today In Science History
Posted by Michael J. Ryan, Ph.D. at 11:56 AM