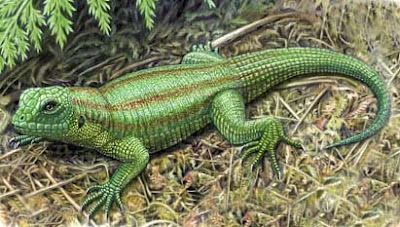 The 130-million-year-old jaw and skull bones from the oldest known plant-eating lizard, Kuwajimalla kagaensis, were unearthed in the Ishikawa Prefecture of Japan.

Prior to the new discovery, the oldest known plant-eating lizard was Dicothodon, which lived in North America about 100 million years ago. Even today, fully herbivorous, or plant-eating, lizards are rare, with only about 3 percent of modern lizards belonging to the group. Most lizards eat flesh, usually insects, or a combination of flesh and plants.

Thus the new fossil species could indicate that angiosperms were already in existence and perhaps widespread millions of years earlier than had been thought, the researchers say.

Currently the oldest evidence a flowering plant is a 125-million-year-old fossil from China.
Posted by Michael J. Ryan, Ph.D. at 6:51 PM