From Roger Thomas of the Paleontological Society:

Malcolm C. McKenna has died at the age of 77 in Boulder, Colorado, ending a long and every productive career as a distinguished scholar and enthusiastic mentor of younger paleontologists.

Malcolm McKenna was a long-time member of 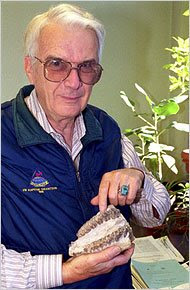 our society, with which he remained associated up to the time of his death.

In 1992, Malcolm McKenna was awarded the Paleontological Society Medal in recognition of his important contributions to the paleontology, relating most notably to the systematics, biogeography and evolution of Cenozoic mammals. A detailed appreciation of McKenna’s work up to that time, by John Flynn, with a response by McKenna, appears in the Journal of Paleontology 67 (4): 688-690.

Some of you may also have seen the obituary by John Noble Wilford that appeared on page A19 of the New York Times, on Monday, March 10.
Posted by Michael J. Ryan, Ph.D. at 4:09 PM