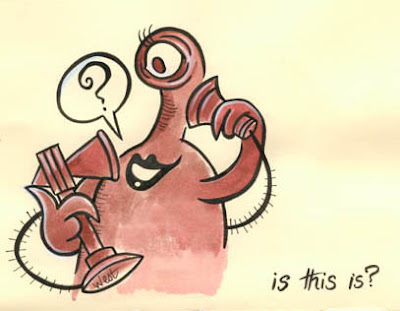 A deficiency of oxygen and the heavy metal molybdenum in the ancient deep ocean may have delayed the evolution of animal life on Earth for nearly two billion years.

Following the initial rise of oxygen in the Earth’s atmosphere 2.4 billion years ago, oxygen was transferred to the surface ocean to support oxygen-demanding micro-organisms. However, the diversity of these single-celled life forms remained low, and their multi-cellular ancestors (animals) did not appear until about 600 million years ago.

For animal life to commence, survive and eventually expand on Earth, a threshold amount of oxygen – estimated to be on the order of 1 to 10 percent of present atmospheric levels of oxygen – was needed.

Suspecting that deficiencies in oxygen and molybdenum might explain this evolutionary lag, the team measured the abundance of molybdenum in ancient marine sediments over time to estimate how much of the metal had been dissolved in the seawater in which the sediments formed. 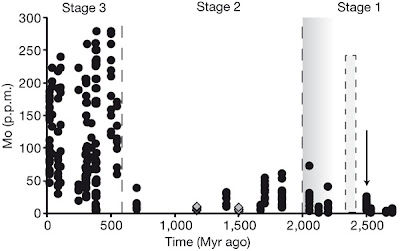 Black circles are euxinic examples; grey diamonds refer to non-euxinic, organic-rich shales. The gradient represents the diffuse stage 1–2 boundary as defined in the text. The arrow marks the Mount McRae 'whiff' interval7; the dashed area is the Great Oxidation Event as defined by the multiple sulphur isotope record.

By tracking molybdenum in shales rich in organic matter, researchers found the deep ocean remained oxygen and molybdenum-deficient after the first step. This condition may have had a negative impact on the evolution of early eukaryotes, our single-celled ancestors. The molybdenum record also shows that the deep ocean only became fully oxygenated by around 550 million years ago.

According to this research, the timing of the oxygenation steps suggests that significant events in Earth’s history are related. Scientists have long speculated that the evolution of the first animals was somehow linked to the so-called Snowball Earth hypothesis, where the Earth was covered from pole to pole in a thick sheet of ice for millions of years. Oxygenation of the oceans and the evolution of animal life occurred shortly after the last of Earth’s global glaciations.
Posted by Michael J. Ryan, Ph.D. at 11:13 PM