The First Hominin of Europe 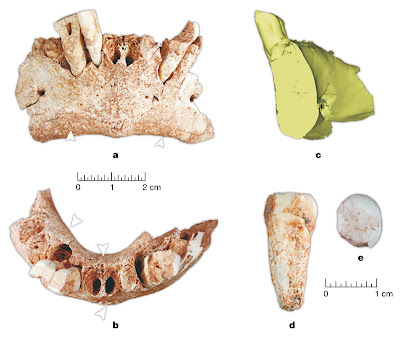 a, Frontal view. Arrowheads point to the position of the anterior marginal tubercle, and the arch of the marked incisura submentalis. b, Superior view. Arrowheads point to the mental protuberance, the subvertical alveolar planum and the slight alveolar prominence. c, Median sagittal cross-section of the symphysis based on a three-dimensional computed tomography reconstruction. d, Distal view of the LP4 of ATE9-1. e, Occlusal view of the LP4; mesiodistal dimension: 8.9 mm; buccolingual dimension: 11.4 mm (estimated).

Abstract: The earliest hominin occupation of Europe is one of the most debated topics in palaeoanthropology. However, the purportedly oldest of the Early Pleistocene sites in Eurasia lack precise age control and contain stone tools rather than human fossil remains.

Here we report the discovery of a human mandible associated with an assemblage of Mode 1 lithic tools and faunal remains bearing traces of hominin processing, in stratigraphic level TE9 at the site of the Sima del Elefante, Atapuerca, Spain. Level TE9 has been dated to the Early Pleistocene (approximately 1.2–1.1 Myr), based on a combination of palaeomagnetism, cosmogenic nuclides and biostratigraphy. The Sima del Elefante site thus emerges as the oldest, most accurately dated record of human occupation in Europe, to our knowledge.

The study of the human mandible suggests that the first settlement of Western Europe could be related to an early demographic expansion out of Africa. The new evidence, with previous findings in other Atapuerca sites (level TD6 from Gran Dolina), also suggests that a speciation event occurred in this extreme area of the Eurasian continent during the Early Pleistocene, initiating the hominin lineage represented by the TE9 and TD6 hominins.
Posted by Michael J. Ryan, Ph.D. at 11:22 PM