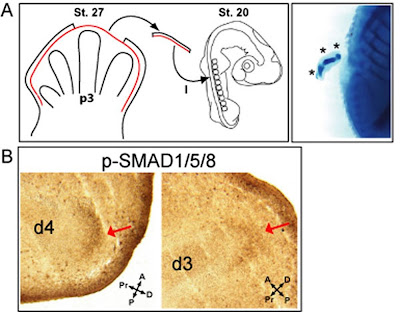 Observations on heterotopic graphs of subridge mesenchyme (A), high magnification of phosphorylated SMAD1/5/8 immunoreactivity (B)
Studying the embryonic chick foot, the developmental biologists have come up with a model that explains how digits grow and why each digit is different from the others.

They have shown that growth begins in a portion of the developing digit they have named the phalanx-forming region (PFR). They illustrated that phalanges, structures that later become finger or toe bones, arise not from cartilage cells but from mesenchymal cells. And they discovered that a complex array of signals from a variety of genes at different times combine to form each phalanx.

In birds and mammals, digits arise in the mitten-shaped autopod, or developing foot, which consists of two alternating regions. The digital rays, made up of cartilage and mesenchyme, become the phalanges in the adult chicken's toes. These alternate with the interdigits, also consisting of mesenchymal tissue, which fill the space between the digit rays and eventually regress.

"Our studies showed that a specific region of mesenchymal cells in the digital ray receive the interdigital signal, and that BMP receptor signaling in this region plays a central role in the process," notes Fallon. "Changes in the levels of signaling lead to different developmental outcomes."
Posted by Michael J. Ryan, Ph.D. at 3:51 PM