Miller (b.1930) is an American chemist who made a series of

famous experiments beginning in 1953, to determine the possible origin of life from inorganic chemicals on the primeval earth. He passed electrical discharges (simulating thunderstorms) through mixtures of reducing gases, such as hydrogen, ammonia, methane and water, 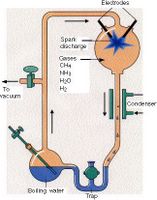 that were believed to have formed the earliest atmosphere.

An analysis days later showed that the resulting chemicals included glycine and alanine, the simplest amino acids & the basic building blocks of proteins. Other compounds included urea, aldehydes and carboxylic acids. Thus, a "primeval soup" is the currently accepted most plausible explanation, though incomplete, of the origin of the complex organic molecules of life.
Posted by Michael J. Ryan, Ph.D. at 12:57 PM