On this day in 1797, Thomas Jefferson (1743-1826) presented a paper on Megalonyx to the American Philosophical Society. It was published as "A Memoir on the Discovery of Certain Bones of a Quadruped of the Clawed Kind in the Western Parts of Virginia," 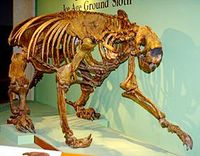 Transactions of American Philosophical Society 4:255-256, along with an account by Caspar Wistar (1761-1818). In 1822, this huge extinct sloth was named Megalonyx jeffersoni by a French naturalist.

The species name Megalonyx is derived from the Greek language and refers to the large claw on the third digit of each of the sloths hind feet. It was a bear-sized ground sloth, over 2 meters tall, widespread in North America during the last Ice Age. Image from HERE
Posted by Michael J. Ryan, Ph.D. at 9:23 AM