From The Victorian Web: Buckland was the first man to identify and name a dinosaur (Megalosaurus), although the name dinosaur had not yet been coined by Richard Owen. Partly in response to the controversial works of Cuvier, Buckland wrote Reliquiae Diluvianae (1823) in which he argued that the evidence of geology alone demonstrated that a 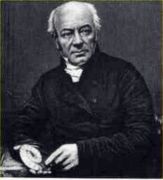 great flood had covered the entire globe. This move helped to make geology look more respectable in a religiously conservative England and perhaps to advance Buckland's own career at Oxford by making geology appear to be a respectable companion to the classics.