New Light on The Tree of Life 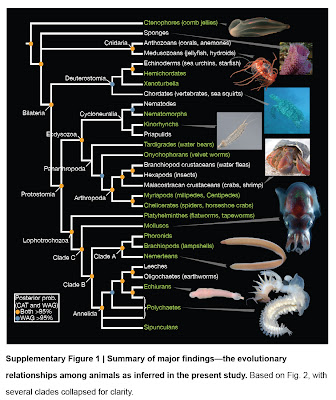 The most comprehensive animal phylogenomic research project to date, involving 40 million base pairs of new DNA data taken from 29 animal species, settles some long-standing debates about the relationships between major groups of animals and offers up a few surprises.

The big shocker: Comb jellyfish – common and extremely fragile jellies with well-developed tissues – appear to have diverged from other animals even before the lowly sponge, which has no tissue to speak of. This finding calls into question the very root of the animal tree of life, which traditionally placed sponges at the base.

“This finding suggests either that comb jellies evolved their complexity independently from other animals, or that sponges have become greatly simplified through the course of evolution. If corroborated by other types of evidence, this would significantly change the way we think about the earliest multicellular animals,” said Dunn.

Charles Darwin introduced the idea of a “tree of life” in his seminal book Origin of Species. A sketch of the tree was the book’s only illustration. Nearly 150 years after its publication, many relationships between animal groups are still unclear. While enormous strides have been made in genomics, offering up a species’ entire genome for comparison, there are millions of animal species on the planet. There simply isn’t the time to sequence all these genomes.

•unambiguously confirmed certain animal relationships, including the existence of a group that includes invertebrates that shed their skin, such as arthropods and nematodes;

•convincingly resolved conflicting evidence surrounding other relationships, such as the close relationship of millipedes and centipedes to spiders rather than insects;

•established new animal relationships, such as the close ties between nemerteans, or ribbon worms, and brachiopods, or two-shelled invertebrates.
Posted by Michael J. Ryan, Ph.D. at 1:13 PM