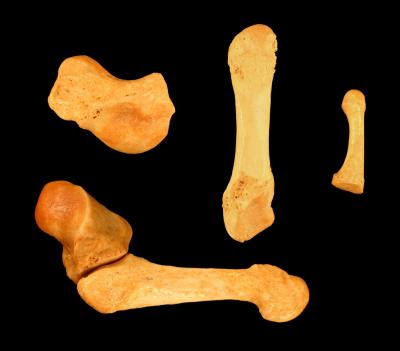 The first handbones of Hadropithecus. Photo by Dr. Pierre Lemelin, U. of Alberta.

Analysis of the first hand bones belonging to an ancient lemur has revealed a mysterious joint structure that has scientists puzzled.

Researchers analyzed the first hand bones ever found of Hadropithecus stenognathus, a lemur that lived 2,000 years ago. The bones were discovered in 2003 in a cave in southeastern Madagascar, an island nation off the coast of Africa in the Indian Ocean. Hadropithecus is related to the modern-day sifaka, a type of lemur with acrobatic leaping skills.

Examination revealed a never-before-seen hand joint configuration on the side of the little finger. The same joint configuration is straight in all other primates, including Archaeolemur, a close extinct relative of Hadropithecus. The hand bones also showed that Hadropithecus had very short thumbs and was a quadrupedal species, walking on all fours, much like many primates, such as baboons, do today.