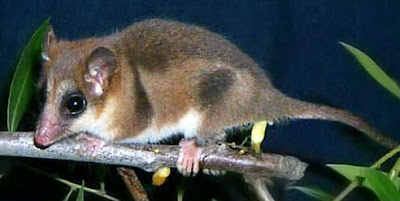 The fossilised ankle and ear bones found on an Australian farm are those of Australia's earliest known marsupial, Djarthia, a primitive mouse-like creature that lived 55 million years ago.

A new study in the journal PLoS ONE has confirmed that Djarthia is also a primitive relative of the small marsupial known as the Monito del Monte – or "little mountain monkey" – from the dense humid forests of Chile and Argentina.

"The fossil ankle and ear bones of Djarthia make it clear that the Monito del Monte descends from a Djarthia-like ancestor, and so probably returned to South America from Australia before Gondwana broke up. The continents have been separated by deep ocean since about 40 million years ago."

Like the Monito del Monte, Djarthia was a little larger than a mouse and, likewise, its ankle bones show adaptations for climbing trees. It probably had a similar diet as well: the Monito del Monte eats insects and other small invertebrates and some fruits.

The Monito del Monte is nocturnal and its agility and prehensile tail make it an excellent climber. Females carry up to five young in a well-developed pouch.
Posted by Michael J. Ryan, Ph.D. at 9:48 AM