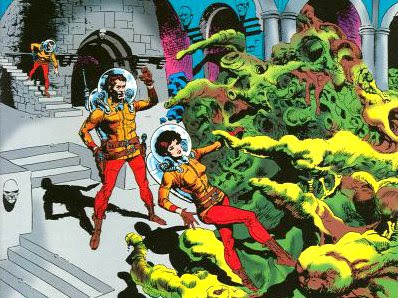 Weird Science #22
The organic soup that spawned life on Earth may have gotten generous helpings from outer space, according to a new study. Scientists have discovered concentrations of amino acids in two meteorites that are more than ten times higher than levels previously measured in other similar meteorites. This result suggests that the early solar system was far richer in the organic building blocks of life than scientists had thought, and that fallout from space may have spiked Earth’s primordial broth.

For the amino acid study, the researchers took small samples from three meteorites of a rare type called CR chondrites, thought to contain the oldest and the most primitive organic materials found in meteorites. CR chondrites date from the time of the solar system’s formation. During an early phase of their history the meteorites were part of a larger “parent body,” such as an asteroid, which later was shattered by impacts.

“The amino acids probably formed within the parent body before it broke up,” says Alexander. “For instance. ammonia and other chemical precursors from the solar nebula, or even the interstellar medium, could have combined in the presence of water to make the amino acids. Then, after the break up, some of the fragments could have showered down onto the Earth and the other terrestrial planets. These same precursors are likely to have been present in other primitive bodies, such as comets, that were also raining material onto the early Earth.”
Posted by Michael J. Ryan, Ph.D. at 8:19 AM