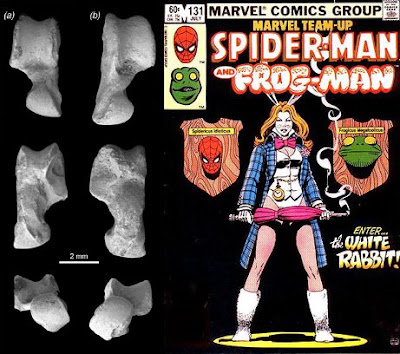 Bones photographs courtesy Rose et al.
Bones that a scientist picked up on a trip to India (including the above ankle bones, far left) were later deemed to be the oldest known rabbit bones ever found, a new study says. The ancient rabbit would not likely have looked similar to the modern-day Spider-Man ‘villian’, White Rabbit (right).

The new bones also show that advanced rabbit-like features evolved earlier than thought—as far back as the early Eocene, which lasted from 54.8 to 33.7 million years ago, experts say.
Posted by Michael J. Ryan, Ph.D. at 8:31 AM