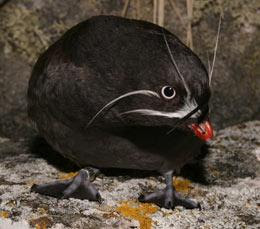 Biologists have shown that the whiskered auklet uses the plumes on its head like a cat’s whiskers to feel its way through dark crevices.

Summary (from the journal): Showy head plumes in birds are generally thought to be ‘sexy ornaments’ used as a display to seduce choosers and for assessment of the presenter, and thus have evolved as a product of mate choice. An overlooked possibility is that these elongated feathers are used to detect immediate surroundings to facilitate obstacle avoidance through their sensitivity to pressure or touch. We tested this hypothesis using whiskered auklets (Aethia pygmaea), a small, nocturnal seabird that nests in deep rock crevices and has spectacular facial ornaments, including a long forward-curving forehead crest and whisker-like white plumes.

The birds were exposed to an experimental maze devoid of any visible light that simulated the structure and conditions of breeding crevices. With the protruding crest and facial plumes taped down, birds had a 275% increase in head bumps with the walls and roof of the maze. Without the aid of the crest, naturally long-crested birds had more frequent head bumps than short-crested individuals.

These results suggest that whiskered auklet’s elongated feather adornments have a touch sense use for orientation in darkness underground. In addition, individuals with longer ornaments depend more on these traits for navigation. More widely, other bird species inhabiting cluttered environments would benefit from the elongated facial plumage that mechanically detects surrounding obstacles.
Posted by Michael J. Ryan, Ph.D. at 8:05 AM