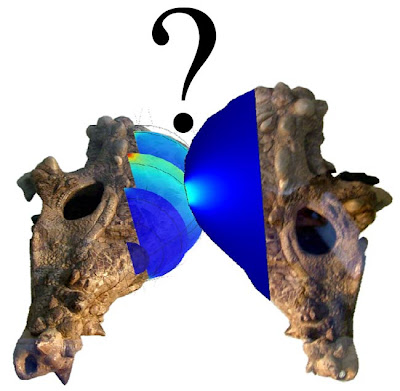 Dome-headed pachycephalosaurus might have passed through a combative teenage stage in which they butted heads in violent clashes.

Our friend, Eric Snively, is in the news again. Since I can’t find the press release on either the U of A or Villanova web sites (for shame!), I’ve taken this from LiveScience.com:

They simulated the animals moving with closing speeds of both 6.7 mph and 15 mph (3 meters per second and 6.7 m/s), the latter being the maximum ramming speed given the likely hip heights and limb proportions of pachycephalosaurs. The resulting smash-ups provided information on the amount of force, how that stress was distributed along the skulls and ultimately the post-ramming state of the skulls.

The resulting force would rattle any football player today, but in the dino world, human linebackers would have packed a wimpy punch. "The highest forces we got for a large pachycephalosaur were about 14,000 Newtons, or about as much as T. rex would exert with one of its back teeth," Snively said.

"The stresses in big adults were usually far below those that would break the bone," Snively said. However, he noted, research by Goodwin and Jack Horner of Montana State University's Museum of the Rockies has shown that an adult pachycephalosaur would've had almost no blood vessels embedded in its dome.

"I would still argue that there is no evidence to support head-butting in pachycephalosaurs," said Goodwin, who was not involved in the current study.
Posted by Michael J. Ryan, Ph.D. at 7:04 AM