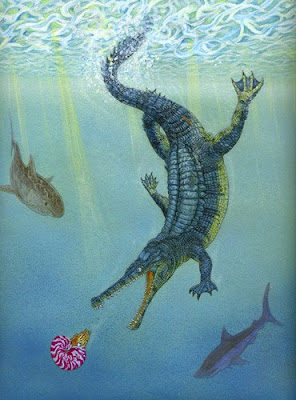 A fossil of a new species of prehistoric crocodile found in Brazil has led scientists to believe the reptile benefited from the extinction of dinosaurs to migrate from across the Atlantic.

Guarinisuchus munizi -- the "warrior of the seas," as the crocodile has been dubbed -- is believed to have had its origins in Africa some 200 million years ago. But the remains of a jaw, skull and vertebra discovered in Palaeocene deposits of northeastern Brazil suggests the species set off for new territory 62 million years ago, according to researchers. 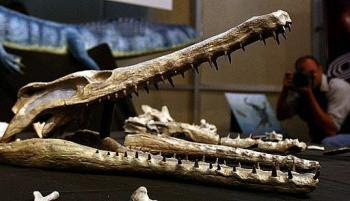 "They left the African continent and are believed to have occupied zones in South America, and later regions in North America," paleontologist Maria Somalia Viana told a media conference in Rio de Janeiro.

The reptile, which grew to around three meters (10 feet) and was perfectly adapted to living in the ocean, apparently took advantage of the extinction of bigger marine lizards called mosasaurs to dominate the waters, another paleontologist, Alexander Kellner, said.
Posted by Michael J. Ryan, Ph.D. at 9:49 PM