The Function of Duck-Billed Dino Crests

From the U of Toronto press release:

After decades of debate, a U of T researcher has finally determined that duck-billed dinosaurs' massive but hollow crests had nothing to do with what many scientists suspected -- the sense of smell. 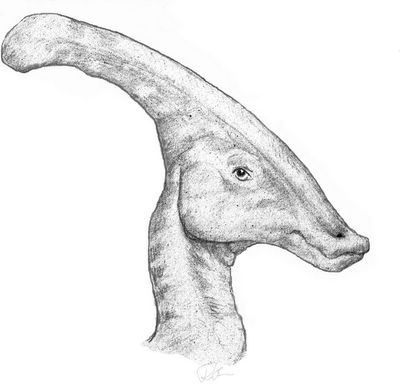 Speculation about their function has led to theories that the crests functioned as everything from brain coolers to snorkels for underwater feeding. Now, David Evans, a PhD student in zoology at the University of Toronto, has been able to use a reconstructed brain cavity to rule out one historically popular theory: that the crests evolved to increase the animal's sense of smell. "From the brain case, there's no indication that the nerves curled upwards into the crest, as we would expect if the crest was used for the sense of smell," Evans says.

"It appears that the brain changed very little from their non-crested dinosaur ancestors, and that the primary region of the sense of smell was located right in front of the eyes – and coincidentally, that's where it is in birds, crocodiles, mammals and basically all four-legged animals."

Evans studied fossils from a group of herbivorous dinosaurs called lambeosaurs, which are often referred to as crested duck-billed dinosaurs. Lambeosaurs are easily recognizable for their large cranial crests, which contain elongated nasal passages and loop over their skull. Duck-billed dinosaurs are sometimes referred to as the "Cows of the Cretaceous period" and lived 85 million to 65 million years ago. 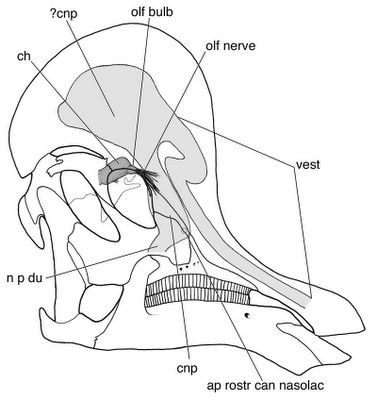 Evans reconstructed the dinosaurs' brain cavity using well-preserved fragments of fossilized bone and created the first-ever cast of the lambeosaur brain, which is approximately the size of a human fist. The findings add weight to two currently popular theories: that the crests were used to create resonant sounds to attract mates or warn of predators, or that they were used for visual display in mate selection or species recognition, similar to feather crests in some birds.

The study appears in the January issue of the journal Paleobiology. Evans is now examining how the crests developed during the life spans of different lambeosaur species, which could shed further light on their purpose.

Kudos to one of my favourite palaeo-collaborators, David Evans, for publishing this excellent piece of work! The project had its beginnings as an undergraduate project while he was working at the Royal Tyrrell Museum in Drumheller. The illos above are courtesy David with the topmost being the work of his uncle. Evans was also involved in THIS WORK published last year.
Posted by Michael J. Ryan, Ph.D. at 7:22 PM