In an article published in the July 29 issue of Science, a team led by Canadian paleontologists from the University of Toronto (including lead author Robert Reisz and the palaeoblogger’s good friend David Evans (see previous post)) report on the discovery of the oldest known dinosaur embryos, and the rare glimpse into the life history of the sauropodomorph dinosaurs that they provide. The Early Jurassic aged embryos are identified as Massospondylus, a ‘prosauropod’ dinosaur that grew to 5m in length and was relatively common in South Africa. 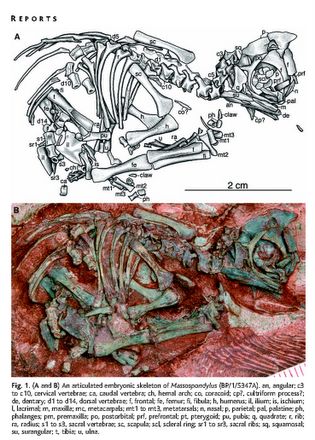 The exceptional growth series of Massospondylus was analyzed from embryo to adult using articulated skeletons. Body proportions of the embryos indicate that the hatchlings were born four-legged (quadruped). As the animal matured, the neck grew faster than the rest of the body but the forelimb and head grew more slowly. The end result was a two-legged animal that looked very different from the four-legged embryo.

The researchers suggest that the later four-legged gait of the giant sauropods may have evolved through a developmental phenomenon called paedomorphosis, the retention of juvenile features in the adult, and may have preceded their giant size. In addition, the embryonic skeletons lack teeth, leading the researchers to hypothesize that the young may have required parental care.

Read the story at National Geographic News by clicking HERE.