The palaeoblogger hasn’t seen the new Kong movie, but ‘Sturdy’ Steve Bissette has and he’s impressed. Steve has done a great multi-part essay over at his MyRant blog that covers more aspects of the film and its history than you can shake a throttled pterydactyl at.

Steve probably knows more about film history than any other 10 people put together and has contributed many reviews & essays to newspapers & magazines too numerous to mention. His daily ‘rant’ is always worth a read.

You can go directly to his in-depth 'Off To Skull Island' essays on King Kong through these links:

Note that Steve speaks his mind and therefore his site comes with a mild language warning. I don't agree with everything Steve says (or how he says it) but anything he writes is entertaining and informative! 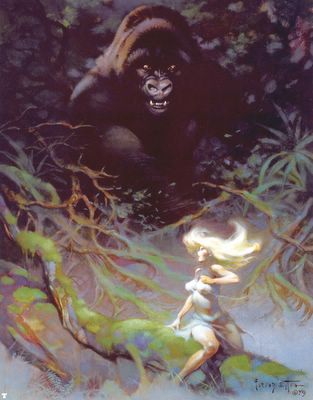 Earlier in 2005 Steve did a multi-part ‘Paleo-Path’ on the history of dinosaurs in the comics right here at the Palaeoblog.

You can go directly to all the entries via this link to the Paleo-Path Archives.

And, Steve is also co-teaching with Walter Ungerer a two-week University of Vermont on-line film class entitled, "Ways Of Seeing: Film as Art" which I’m sure is worth checking out.
Posted by Michael J. Ryan, Ph.D. at 9:19 AM