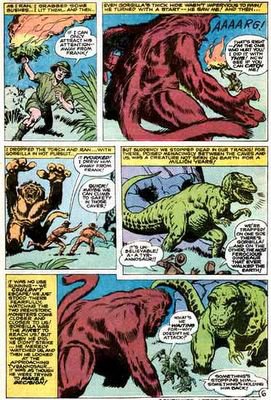 Notice anything familiar? Like a giant 'gorilla' vs. a T. rex? Which reminds me of a problem even I noticed with the Carl Denham character in the original King Kong movie when I was 6 years old. But I’ll let Bob from the Kirby Comics Blog pick up the story:

"Anyway, this story involves a group of scientists tracking down rumours of the missing link between apes and men in the mountains of Borneo. They succeed beyond all expectations when they find a living example in Gorgilla, but decide to leave him there when he saves them from a dinosaur also on the island, seemingly sensing his distant kinship with the humans. Y'know, the dinosaur would seem to be an even greater find than the missing link, and is just lying there dead for the taking, but I guess these guys specialize and have trouble seeing beyond their field (and I just realized that's a bit of a flaw in KING KONG. You find an island with a large ape and with dinosaurs, and you make a big fuss about the ape?)."

Thanks to Bob for letting me swipe this fun story from his blog!

Also: Thanks to sharp-eyed Lisa Z. in Calgary (former student and now proud Mom of two) for pointing out that GorGilla has a tail and could therefore only be a link between monkeys and apes, but not apes and humans!
Posted by Michael J. Ryan, Ph.D. at 1:52 PM