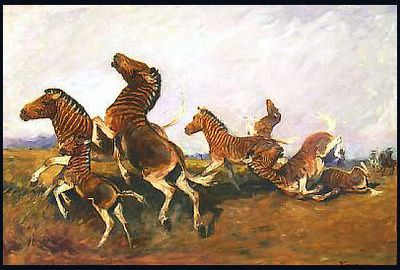 Jon Lackman at Slate.com has this article on one man’s quest to resurrect an extinct mammal:

In what would be an unprecedented feat, a South African amateur scientist says he is going to bring an animal back from extinction: the quagga. A large mammal that descended from the zebra, the quagga filled South Africa's plains for millennia. But it fell to gun-toting European colonists and was last seen alive in 1883.

Reinhold Rau seems to be getting close to his goal with his latest foal, Henry (below), a grandchild and a great-grandchild of his original zebras. Henry's coloring and his stripes—faint, narrow, and few—strongly resemble 19th-century quagga. Alas, some stripes still remain on Henry's hocks, where quagga didn't have them. But one can imagine that one of Henry's children could be a full-fledged quagga. 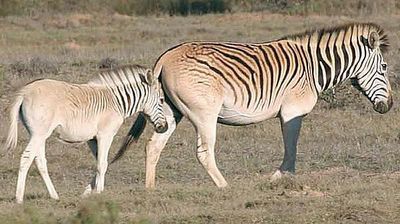 How do you reverse extinction? And what is a quagga, anyway? Watch the slide show HERE to find out.

Find outmore about The Quagga Project HERE.
Posted by Michael J. Ryan, Ph.D. at 12:02 AM