Grabau was an American geologist and paleontologist, known for his work on world stratigraphic deposits and the deciphering of Earth history. 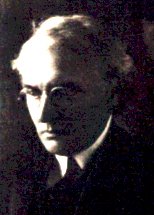 In 1899, he published an early paper that studied the environment of old sedimentary rocks in light of knowledge of the conditions of life among modern organisms, The Relations of Marine Bionomy to Stratigraph, which was a step toward the development of paleoecology. For more than a quarter of a century, he worked on the geologic survey of China. In 1940, he developed a theory of rhythms in the growth of the Earth's crust, and of repetitions in mountain building.